We finished out last week with a bang as we reaped the reward of some very good options ideas. Not only did our fresh ideas from Friday morning in the SPY and TLS pop off for multibag gains, but our targets in DRI from Thursday morning’s premarket report, also tacked on some impressive new highs.

These gains were added in roughly the final 90 minutes of the session, where the markets made an incredible surge into the close that sets this holiday-shortened week up to be very interesting.

Here are the trading ranges and total possible profits on our successful ideas, a couple of which are still active for another couple of weeks before expiration:

We’ve been taking note of the massive selloff in VIAC over the past week as the company’s massive fundraising efforts resulted in a huge $2.1B block trade priced at roughly $47/share. The stock has come all the way down to those levels and we want to enter a longer-term swing trade idea to coincide.

It was just on Tuesday morning that we did a review of the performance of GERN, a stock we had initially tagged on February 5th. It had made considerable progress over a six week period, and after a fantastic session yesterday, the stock once again shot to new highs.

It ran all the way to an even 5.00, which from the 2.025 low we observed in early February, marks an increase of 147% This week has brought the highest volume, and now the highest PPS since 2015 for GERN. With the stock well into Blue Skies, we’re be interested to continue following its activity.

Speaking of stocks on our radar that have enjoyed longer-term success, we want to talk about DRRX again this morning. We’ve been tracking this stock since mid-December (12/14), and in two separate runs here in 2018, we’ve seen it make fantastic progress.

We also included DRRX once again at the beginning of this month, and yet again on Tuesday of this week as the stock has continued to push its way further and further upward. This month alone it has risen from 1.2338 to a new high of 2.20, a gain of 78%

Subsequent to our original alert, DRRX registered a low of .875, and from there, yesterday’s high measures as a 151% increase.

In yet another month-long gainer, we have NIHD. We signaled out interest in tracking this play back on the last day of February and it has been steadily ramping its way up all month long.

We’re coming back to RXMD once again to review this unstoppable momentum play that has appeared in five of our last six reports. After our initial mention of this play on February 22nd, we witnessed a low of .0663 and it hasn’t looked back since.

Continuing its impressive trajectory into blue skies, with every uptick the stock attains a new five year high. Yesterday it reached .265, which represents an observed increase of 301% in a matter of roughly three weeks! As measured from Monday of last week at its low of .1171, it managed a one week swing of 126%

We want to tag DPW this morning as a potential bottom bouncer, after noticing an interesting chart setup.

As we’ve pointed out on the following snapshot, the stock has come down to what we feel is a pretty solid area of support, and looks like it may try to make a run at its 50DMA. It also saw a pretty good surge in volume yesterday, so we’ll place it on watch today. 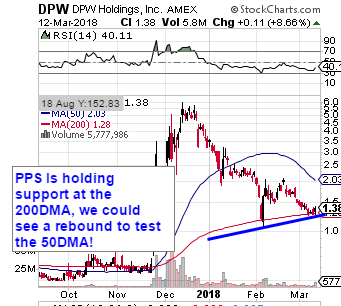