It was back on the 9th of this month that we selected NBEV as a potential bottom play, and wanted to kick off the week by swinging back around to recap the excellent move the stock has made for us thus far.

After seeing a low of 2.11 on the morning of our initial alert, the stock has continually risen over the eight sessions since, touching a high of 4.24 on Friday. That represents a very nice 101% move, while volume over the same period has been notably increased. We’ll continue to monitor the progress here in coming sessions.

Speaking of steady risers, we’ve watched PETS for quite awhile now, having mentioned it for the first time in our report from the morning of September 11th.

Subsequent to that report, we observed a low of 32.90 and despite already being a thirty dollar stock, we’ve still seen it increase gradually and significantly, culminating at Friday’s high of 53.89. That marks a 64% increase, which is absolutely fantastic for a stock in this price range.

We’ll be interested to see how the stock is affected by the company’s solid premarket earnings release today. It’s gapping up in early trading and it appears we will see our observed highs boosted yet again.

Yesterday we offered up our opinion that the SPY was going to get back to its bullish ways, and outlined what we felt was an attractive set of contracts in the options chain, the SPY 01/17 $277.50-279 Calls. It was for quick-strike trades only, given that they expired at 4 o’clock, and the chances were certainly there for the taking.

We said we’d be looking for the classic dip and rip pattern to present those chances for intraday flips, and our idea couldn’t have worked out much better, including our second instance of multiple thousand percent gainers in the past week! The potential single session profits on the table were as follows:

We also want to submit a fresh options idea this morning to coincide with an ideal chart setup on YORW. As you can see on the included snapshot, the stock began to rebound off of a multiple-bottom setup and looks as if it could easily make a run of at least a few dollars in a potential recovery.

We’ll be ready with a couple of contracts to track in the event that a more sustained upswing is in the cards, with the YORW 02/16 $30 & $35 Calls. 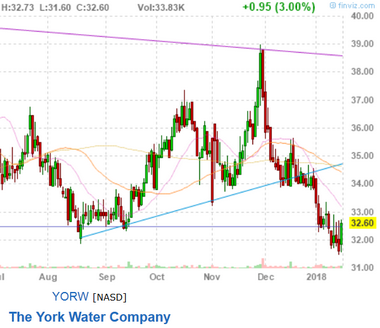