We focused on stocks quite a bit earlier on in the week, so this morning we wanted to take the opportunity to put another potential options play into the mix. We’re constantly looking for company’s that have just reported earnings, which gives us the potential for the volatility that we want.

In the case of ATVI, while its quarterly figures were lacking, the tock was at a bottom, and appears to want to go green today. We will put the ATVI Weekly $42-43.50 Calls on watch this morning, and monitor for the remainder of the week for a possible rebound off of what was its new 52-week low, registered on Monday.

Our regular readers are well aware of our fondness for the SPY ETF. We have taken advantage of it on many occasions. A quick peek into our archives reveals that today is the 114th time we’ve mentioned the SPY in our newsletters. It’s a well that we continue to draw from, with no indications of that ever changing.

Today, after such a big move yesterday wherein the SPY broke its 200DMA, we want to look for  continuation of the bullish behavior we’re observing. We will designate the SPY Weekly $274.50-275.50 Calls as ones to watch as we head through this midweek.

We’d like to radar a familiar old play that we haven’t taken a close look at in nearly a year. JAMN, over the course of the past couple of months, has tumbled its way back to bargain-basement prices.

Now a subpenny play attempting to get a leg up over newly-registered 52-week lows, we’re going to be observing the stock for a potential recovery in sessions to come, as regaining just a fraction of the ground it’s lost recently could spell multi-bag upswings from current PPS levels. 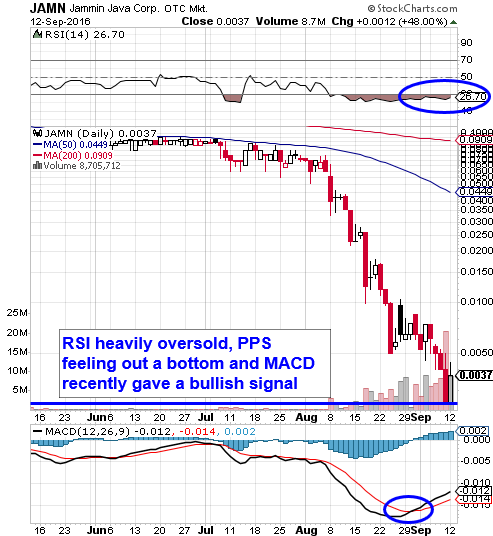 We’ve got a couple of new ideas on the options trading front this morning, and based on positioning on their charts, both of the following stocks may also be ripening for possible swing-trade opportunities.

Ford Motor Co. F – In addition to a slight ascending wedge pattern, F has a sizable gap to the upside not far off of the current pricing. Additionally, short interest on the stock has decreased by a large margin, setting us up to track some potential options ideas to correspond with what we think should be some upward momentum in coming sessions.

Freeport-McMoRan, Inc. FCX – We’re interested in this copper play for a couple reasons this morning. A huge asset sale valued at roughly $2B hitting the newswires (>>Read More) is what has drawn our attention to FCX, in conjunction with a bottom bounce signal off of 5-month support levels on the chart.

We’ll be on the lookout for chances in the FCX 10/14 $11-12 Calls. Like the previously mentioned play, time won’t be as much of a factor here, with just over a month until these contracts are set to expire.

We entered VGZ into the mix in Friday morning’s premarket report after it became clear that it would be a troubling session for currencies in the wake of the Brexit vote. It was among a list of gold-related stocks that we wanted to track, and VGZ has set itself apart from the bunch.

From our observed low of 1.35 from Friday, yesterday’s high of 2.09 represented a respectable session-over-session upswing of 55%, so congratulations to anyone who took a piece of the pie during a time when big gainers have been relatively difficult to come by.

With the markets appearing to be gearing up for a rebound today, we’ll want to keep an eye out for a gap-down and consolidation from VGZ. We’ll only remain interested if it maintains support above its recent swing high around 1.50.

We also need to update folks on our NEWC reminder from yesterday’s report. It was a combination momentum/news play and the stock continued to set new highs.

From a low of .0179 it ran 35% intraday to .0241 on reasonably high volume to the tune of three times the monthly average. The company put out another PR today, and will hold our attention as long as it continues to exhibit momentum-play characteristics.

** Please Note: While we were the first to bring NEWC to our readers’ attention, we have noticed an active promotion on the stock, and would like to make it perfectly clear that we are not a part of that campaign, and have not been compensated in any way for mentioning NEWC. **

This is a stock that we haven’t crossed paths with in more than a year, but we noticed the beginnings of a nice rebound off of recent relative lows, and wanted to tag it for observation.

It has a ripe looking chart, and there is still a good sized gap that remains to be filled. We’ll have this play on our radar for that possibility moving forward. 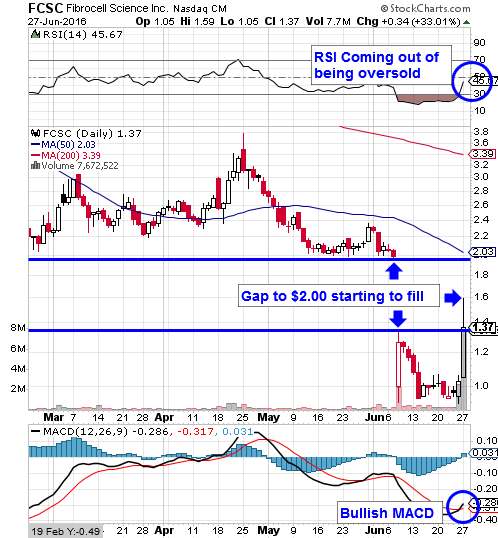 We most recently alerted this one as a bottom play in our watchlist on Tuesday June 14th, and subsequent to that, the stock was trading as low as .0015. Yesterday ADTM broke out off its bottom, catching some nice momentum running as high as .0033, for a move of 120% in just two weeks’ time!

BAC is among those stocks that took a Brexit-based pounding in recent sessions, and it appears to want to rebound a bit today. As long as this market reversal doesn’t turn out to be a head-fake, we’re going to want to pay attention to a couple set of contracts in the BAC options chain. Our possible strike points will be the BAC Weekly $12.50 and $13 Calls. If it can surpass the 13.50 mark, we’ll look to roll up our strike price a level or two.