We’ve been tracking CETV for quite some time now, having initially alerted the stock on May 10th following a routine Form-4 (Insider Trading) scan. We learned that a large block ($75M worth) of shares had just been purchased by none other than Time Warner, and took notice immediately. We observed the stock make a monster move of 147% before being subjected to a large gap-down (hit 52-week low @ 2.03) at the end of October.

We decided to re-alert the stock on November 13th, by which time it was trading as low as 2.12. Since then, it has been stair-stepping its way back up, having seen highs in the high 3.20’s last week. We’re looking for a breach of the 50 and 200DMA’s (3.48, 3.86 respectively), following which the filling of that large gap on the chart could result in further significant increases. 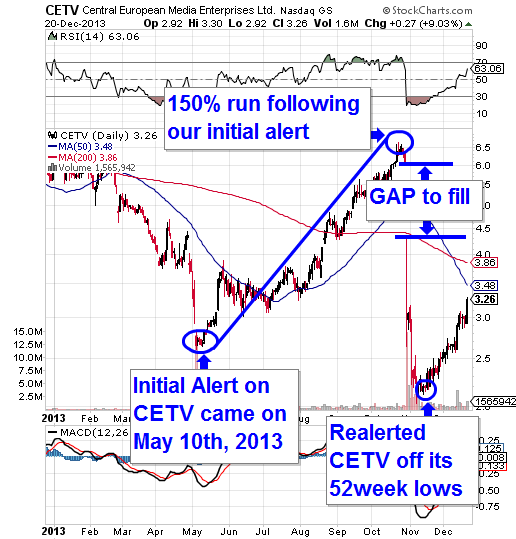 On Friday, we mentioned that we were looking for a break of a key resistance areat on PROW, the 200DMA residing in the .007’s, and the stock indeed surpassed and held above that mark into the close. After opening at .0065, PROW would see a subsequent high of .0098, an intraday run of 51% on more than 5x its 3mo. average volume.

We warned of PROW’s extremely tight share structure, which allows for significant increases on relatively small amounts of buying pressure. The stock demonstrated our point quite succinctly.

Also appearing in Friday’s report was another of our recent favorites in TGRO, a stock which has afforded us ample opportunities in the two weeks that we’ve been tracking it. With our first alert coming exactly two weeks ago, the stock has run from a low .36, all the way up to 1.08, good for a mega-gain of 200%

For those who may have only caught Friday’s alert, there was still the chance to make up to 43% in profit from TGRO’s daily low of  .755 to the 1.08 high.

Friday’s Extended Watchlist also included a few choice picks that put up very respectable sessions to close out the week.

ARIAD Pharmaceuticals, Inc. ARIA has been an Extended Watchlist mainstay since Nov. 12th, being as low as 2.31. Friday’s high of 7.75 represents a great run of 236% in just a little over five weeks.

Most of our regular readers will remember us talking about LATF, along with all of the other medical and legal marijuana-related stocks that we have been tracking recently. We mentioned LATF specifically, as recently as March 26th. We talked about how we had brought it to our readers at the beginning of February, as low as .023, only to see it run to .23, gaining as much as 900% in the process.

We had been observing as it began to cool down, mentioning that we were on the lookout for a bottom, and another chance to take LATF for a ride. It reached that bottom the very next day, on the 27th, touching .015 before beginning the recovery that we were after. The stock has continued this recovery through last week and into this week, and today, has reached as high as .044. That represents a highly respectable 193% move in a span of just two weeks.

Like we stated above, LATF is just one of cannabis related stocks that we have been tracking this year, as our regular readers will remember, we have canvassed the sector for quite some time, and it has been one of our favorite and most lucrative areas of interest recently. To the already sizable list of marijuana plays, we have several related additions for you this afternoon, that we feel should be added to our running watchlist. We suggest our readers keep similar watchlists of their own.