Constellation Brands Inc. STZ –Just as Constellation stock got crushed to new lows in the premarket on Wednesday, we formulated a couple of longer-term options ideas, and wanted to provide updates on the activity there as well.

We were banking on STZ reversing off of those lows and beginning a recovery, and so far, it’s going quite well. Our targets were the  the STZ 02/01 $150-157.50 Calls and the 04/18 $160-170 Calls, and all seven sets of contracts in those ranges have been good for significant gain opportunities. These remain in play, and will remain on our watchlist going forward.

To wrap things up we wanted to go over the call we made on Monday morning in SXTC, which at the time had registered a low of 5.684. After steadily ramping up all week, yesterday the stock reached a new high of 23.35. That worked out to an incredible four-day swing of 311%

Cheers to anyone who caught this mover in Monday morning’s premarket report. It adds to an already impressive start for us here in 2019.

The stock with the most notable performance from yesterday morning’s watchlist was definitely INFI, which began trending up in the premarket, and continued its climb throughout the entire session.

The stock traded up from a low of 2.44 to 3.75, which works out to an intraday rise of 54% and it came on roughly 38X its monthly average volume. An early pullback from profit taking this morning would be a likely scenario, but if INFI can find support at a higher point than yesterday’s low, from

After the FDA’s rejecion of the company’s ‘Dsuvia” opioid painkiller, ACRX took a monstrous pounding yesterday down to its lowest price in three months.

As you can see on the chart, it fell all the way down to an area of support it had established back in July. We’ll be interested to monitor this play for a bottom, which could come at any time. Moves generated by FDA news, whether positive or negative, tend to be over-exaggerated and are almost always followed by a course correction. 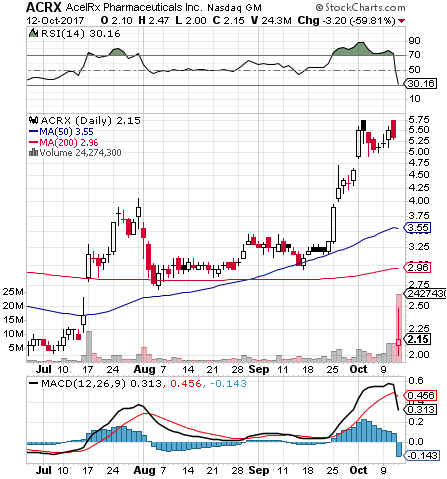 Here we have an example of being extremely ‘early to the party’ as we sometimes say. We alerted on ITEK back in July, after which point it saw a low of .89. It mostly traded sideways throughout the remainder of the summer, but recently began quite an impressive climb.

This morning, the stock hit news highs of 4.15 in premarket trading on news of a proposed merger with a clinical stage gene therapy company. It may have took a few months to realize, but it works out to an increase of 366%