One of the ideas we had formulated toward the end of last week was the PBR Weekly $14 & 14.50 Calls. We mentioned in Friday morning’s premarket report that we expected the already solid gains we had seen the previous session to be expanded upon, and our assumption was accurate.

We’ve been doing things the same way for several years now, issuing our daily ‘Extended Watchlist’ for ideas that don’t get featured, but are stil noteworthy enough to keep watch over. Two such plays that we’ve recently signaled came away from last week with some decent progress.

Epizyme, Inc. EPZM – EPZM was included in Friday’s extended watchlist and it had a very nice intraday push, helped along by solid jobs numbers which led to a good day for the markets as a whole. EPZM traded in a range from 6.40 up to 8.19, a solid 28% jump.
____

Scientific Games Corp. SGMS – On December 14th we included SGMS in our premarket report, and it has made steady and significant headway since that time, trading up from a low of 14.79 to a new high of 19.43 on Friday. A 31% move in a stock in this price range is a pretty darn good move through a few weeks of the holiday season.  We’ll continue to keep an eye on this, which has become a solid momentum mover.

With a bearish market pattern continuing to emerge, we have to be ready to roll with the punches as best we can and use whatever momentum we can find, whether it’s upward or downward. Traditionally, the SPY has been our go-to in these kinds of instances.

It was just Tuesday morning that we signaled a range of five SPY Calls, which all produced big-time gain opportunities this midweek, ranging from 184-245% Now, with the markets looking to pull back once again, we’ll hop right to the other side of the fence and zero in on some SPY Puts to close out the week.

The targets that we’re going to be monitoring today are going to be the SPY Weekly $263.50-262 Puts*, which should work out nicely for possible quick-strike daytrades in the event that the premarket trends we’re observing do persist.

*NEVER trade options with a weekly expiration on a Friday unless you are an advanced level trader working with disposable funds.

We’ve got a sub-penny momentum play on our hands this morning in the form of VLNX. This volatile trader has been swinging violently over the past few months, sometimes more than a hundred percent at a time.

We’re going to have our eyes on VLNX as we close the book on another trading week; the stock came from beneath .001 yesterday and began to run, hitting a daily high of .0017. As you can see on the included chart below, a move past that point would open the door on much larger gains.

When VLNX has surged in recent months, it has routinely peaked in the .002-.004 range. A run back to those levels from here would provide a good chance for quick profits, and chart indicators are showing a forthcoming spike to be a distinct possibility. 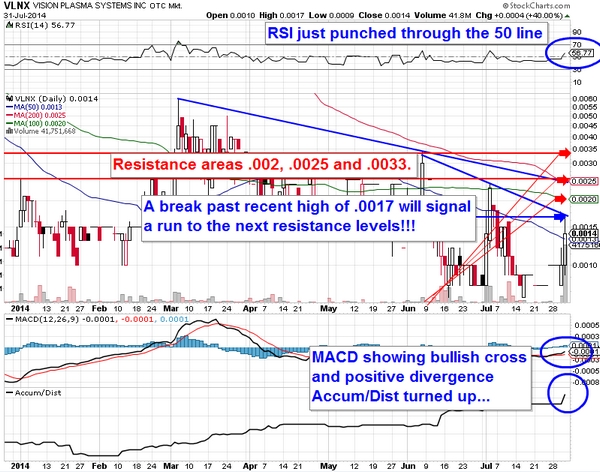 We saw some action from FTNW after including it in yesterday’s report, as the stock offered up the opportunity for modest gains on the order of 23% intraday from .0303 to .04.

While the chart data shows that the stock hit highs in the .055-.065 range, those were what we refer to as “fat-finger prints”; blocks of such small volume so as to make them insignificant, since it would have been impossible to exit any sizable position at those prices.

Still, gains of up to 23%, which were possible, are nothing to thumb your nose at.