The last time we mentioned FRO was early this month, at which time the stock was trading at a low of 1.33. It has been ramping its way up over the past few sessions, making higher highs and higher lows, and we wanted to flag it once again this morning as it is trading up significantly in the premarket.

This morning’s high of 2.15 represents an increase of 61% over the 1.33-low that we observed as recently as Monday. With the heavy early-morning momentum we’re seeing we’ll want to follow along with this play closely today and into next week.

We’ll keep an eye on TLM today as well based on some heavy premarket activity and the fact that the stock is coming up off of its 52-week lows. We’ve noticed a break on the chart due to a gapdown from around 5.60 to 4.80, and with the stock currently trading in the 4.40’s, we should be on the lookout for it to possibly make a run at filling that gap.

Also popping up on our morning scan is CCXI, which is currently trading feverishly in the premarket on the heels of a PR early this morning regarding positive top line results on one of its products currently in testing.

With the stock up over 100% in early trading, we’re going to be on the lookout for massive profit-taking to potentially drive the price back down where it may set us up to take advantage of a dip-and-rip opportunity.

ODP was a good call for yesterday’s session, as it made a solid 8% move on news that a large activist investor took up a significant position in Office Depot while raising its existing stake in Staple stock to 10% total ownership. It is fueling speculation that there could be pressure for a merger between the two, so this is definitely a story we’ll continuously track going forward.

Our top performer from yesterday’s report was most assuredly ABIO. We tagged this play after noticing that it had announced being granted orphan drug status by the FDA for “rNAPc2” as a potential treatment of viral hemorrhagic fever post-exposure to the Ebola virus.

Fresh FDA-related plays can often provide a healthy move to take advantage of, and that’s just what we got from ABIO, The stock traded in a range from .82-1.03, an intraday increase of 25% on nearly ten times the 3-month average volume.

Our long-time readers might recall our coverage of this stock last year in December, which sort of got lost in the shuffle that was the hysteria created by the “Green Rush”. We tracked the stock from the low 1.40’s to over 2.20 over a period of a few weeks, so it will be interesting to see if history continues to repeat itself with ABIO, especially with the stock coming off of it 52-week low on Tuesday.

We also wanted to acknowledge the early morning move made by another of the stocks we mentioned in yesterday’s newsletter, CYRN. It bolted out of the gate, quickly running from 2.22 to 2.67, a 20% spike within the first 15 minutes of the session.

The stock got hammered into the close quite a bit, so we’ll be open to the possibility of seeing some bounce action, provided it can hold support at or above the 50DMA of 1.75.

ODP is in the midst of making a big move on the heels of large activist investor Starboard Value taking up a position which equates to 6% of ODP’s total shares. It also upped its stake in Staples to 10% fueling speculation that it could create pressure for the two office supply giants to merge. It will definitely be a story that we’ll be interested to follow moving forward.

We certainly hope our readers read over yesterday’s morning report thoroughly, because it would mean that people caught our closing note on NYMX in the extended watchlist. We mentioned the big gap-down on the stock, and that we’d be on the lookout for a reversal.

It didn’t take any time at all for NYMX to behave according to our suspicions; it opened at a low of .59 and immediately began its recovery, which lasted for a good portion of the day and culminated in a high of 1.03. Big congratulations are in order for anyone that took advantage of that 74% intraday rip.

The huge gap-down was apparently caused from a knee-jerk reaction to Sunday’s announcement that the company’s prostate cancer treatment (NX-1207) failed to meet primary efficacy endpoints in Phase 3 studies.

It’s fair to mention that prior to yesterday’s session, NYMX was trading at a base level just below $5 (50DMA of 4.77) and yesterday’s bottom-bounce carried it back up to a mere fraction of that level, so it will be interesting to see how much of its lost ground could potentially be recovered in coming sessions.

We caught LTNC on a routine news scan this morning, and we really like what we learned from a quick glance at the PR. LTNC announced that its October revenues set a company record ($2.7M), contributed to a 23-month streak of year-over-year increases, and brought total revenue for 2014 over the $20M-mark.

Those highlights are substantial enough to have us put LTNC on our radar moving forward. A company exhibiting growth patterns like these is certainly worth watching.

The chart is also coming off of a relative bottom, so it could be that we’ve stumbled across LTNC at just the right time. 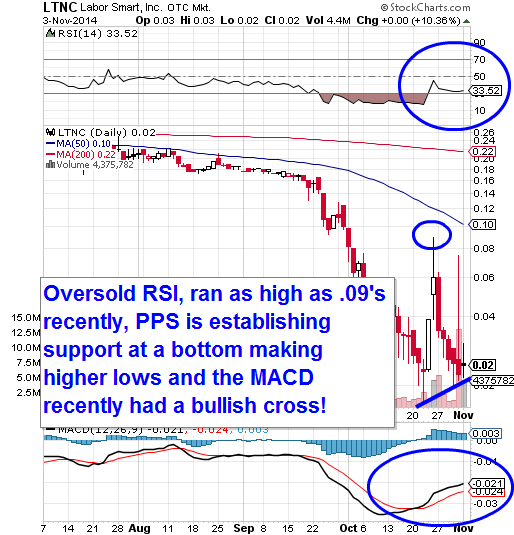