Skip to content
Alliance Creative Group, Inc. ACGX
–
Despite the fact that ACGX has been appearing continuously in our daily reports since we brought it to readers at a low of .0055 last Wednesday, April 16th,we’re fairly certain that no one is getting tired of hearing about it.
–
We certainly aren’t tired of reaping the rewards of what has been an extremely productive stock over the past few sessions. Prior to yesterday, we had seen the big 91% run from the low up to .0105 ( *Please excuse our error in yesterday’s report where we accidentally published .105 as the high), as well as some rapid swings and chances for dip-and-rip style plays that added up to a cumulative total of 59% on Thursday.
–
Yesterday, after coming down to trade at a low of .0091, ACGX ran 21% intraday, once again busting through the penny barrier and touching a new high for us, peaking at .011, an even 100% increase from the low of just three sessions ago.
–

Congratulations are again in order for anyone who has been following ACGX to substantial and repeated gains. The saving grace with this rare OTC gem is the fact that it boasts solid fundamentals, as your own personal due diligence will certainly confirm.

We’ll continue to keep everyone updated on this stock, which has turned into one of our most exciting and rewarding plays this year outside of the cannabis sector.

We re-introduced APP to our reports on April 15th, as “more of a long-term watchlist item that we like to continuously monitor for opportunities over extended periods of time.”

The stock was trading sideways off of support at its bottom at the time, and has since begun to come up to fill the gaps that we pointed out on the chart that day.

So we just wanted to reiterate our interest in APP as it recovers off of its bottom and we head into the summer months, which serve as a precursor to the busy retail season.

We’ve got another new pick coming tomorrow morning, so make sure to monitor your inbox pre-market, or stop by the Blue Horseshoe Stocks blog just prior to the opening bell so you don’t miss out!

PLUG turned in a solid session yesterday, as anticipated, following its appearance in our morning report. Initially, the stock opened at 1.04, made a 12.5% move to 1.1699, and would settle back to the 1.04 level before running up to a daily high of 1.28 for an added 23% intraday gain opportunity.

Following a strong close just a tick below the high-of-day (1.27) we’re going to be following this play once again, as the momentum could easily carry it even higher. As you can see on the chart below the next key area of resistance to watch for a break comes at the 1.45 level. We’ll need to see the stock hold support above a dollar, or it could pull back to fill the gap on the chart back to the .80-range. 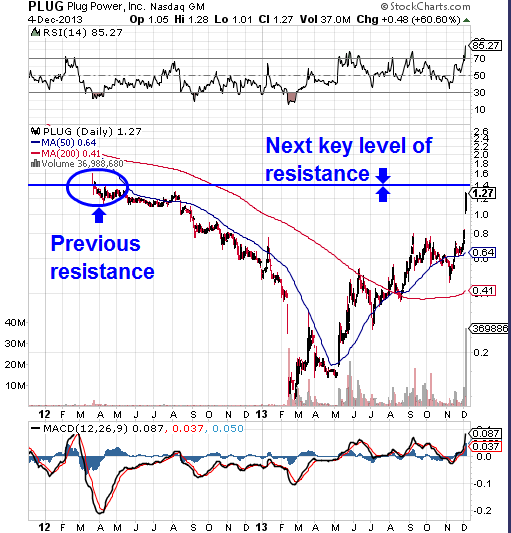 We’ve been tracking IACH via our Extended Watchlist for most of the week. The stock recently made a huge 1800% move from .001-.019, prompting us to put it on our radar,  monitoring for pullbacks and subsequent bounce opportunities, and it delivered just that.

We also want to keep an eye on CALI, which popped up on our pre-market scan as it is gapping up heavily on the heels of a morning press release.

TIANJIN, CHINA, Dec 05, 2013 (Marketwired via COMTEX) — China Auto Logistics Inc. (the “Company” or “CALI”) (NASDAQ: CALI), a top seller in China of luxury imported automobiles, and a leading provider of auto-related services, reported today that on November 30, 2013, its subsidiary, Tianjin Binhai Shisheng Trading Group Co., Ltd. (“Shisheng”) signed an equity transfer agreement with Hezhong International Development Co, Ltd. to acquire Tianjin Zhonghe Auto Sales Service Co., the owner and operator of the Airport International Automall in Tianjin (the “Automall”). The Company plans to develop the Automall into a key site for what it believes can become one of the largest used car businesses in China.

With the way AAPL has been gaining a head of steam lately, it seems plausible to imagine the stock surpassing $600 as we head into the new year. As a result, we are putting the 01/18 $585 Calls on our radar which closed at 12.25 yesterday, meaning the break-even point is 597.50. What we’re looking for, is to see the stock push past to the $610-15 level in January, which could provide triple-digit gains for the 01/18 $585 Calls.

The company finally signed a deal with China Mobile to get its iPhones on their network, as reported by the The Wall Street Journal this morning. China Mobile is comprised of over 700 million users, which obviously represents huge opportunity (in a market more than twice the population of the US) for Apple to boost foreign sales moving forward.

We like the chart on LGBS, another new play that stood out to us today as a good chart-play. The RSI has been holding firm having recently bounced off of the 50-line and getting ready to pass the 50MA overlay. There has been a solid level of support in the .0028 (100DMA) range, The histogram recently flipped up to the bullish side, and the PPO had a bullish crossover. We want to keep an eye on this play this week, as chart conditions are looking pretty ripe.

This morning we caught MTG on our scanner, as it is trading up 20% pre-market. Taking a look at the chart, there is a large gap to fill from the beginning of August, when the stock fell from the 2.50 range, on down to .66. Considering the fact that the stock is, today, gapping up past September’s resistance, there is a fair possibility that we could see MTG continue to rally to the two dollar range, where it could fill its gap.

We’ve pointed out the gap on the chart below for your convenience.

Also gapping up this morning is FONR, a stock that made a big run earlier this year, trading as low as 1.81 in March, and rocketing to a high of 6.80 in April. The company released some really encouraging news this morning regarding some extremely heightened financials. We want to keep an eye on FONR moving forward as we see how this promising news affects the current momentum.

MELVILLE, NY, Oct 01, 2012 (MARKETWIRE via COMTEX) — FONAR Corporation (NASDAQ: FONR), The Inventor of MR Scanning(TM), reported today its year-end financial results for the year-ended June 30, 2012. The Company has now had nine straight quarters of profitability. For the 2012 fiscal year as compared to the 2011 fiscal year, the Company made improvements in revenues and profit across both of its operating segments, those being the UPRIGHT(R) MRI segment that includes product sales, service and repair fees, and HMCA, its STAND-UP(R) MRI center management subsidiary. All of these utilize the FONAR UPRIGHT(R) Multi-Position(TM) MRI which is also known as the STAND-UP(R) MRI. >>FULL STORY