HMTF is the first of two new players in the cannabis sector that we wanted to put on our radar this morning. We’ve seen far too many of these stocks, even if the decision to enter the pot sector was arbitrary, subsequently blow their tops as traders clamor to position themselves for the latest hot ticket. At this point we’ve seen it happen so much, that reason alone is enough to call our attention to HMTF.

The interesting twist behind HMTF, is that unlike some of the other plays in this space, it is transforming its original business to fit the market. Previously a real estate acquisition and leasing firm, the company will now direct focus toward developing marijuana cultivation properties with the express intent of leasing them out to licensed growers.

DENVER, Colorado, March 10, 2014 /PRNewswire via COMTEX/ — “Home Treasure Finders, Inc. (OTCQB: HMTF) (“Company”) is pleased to announce that on March 3, 2014 the Company formed a wholly owned subsidiary, HMTF Cannabis Holdings, Inc. to purchase and improve properties that qualify for legalized cultivation of marijuana. We anticipate that our properties will be leased to licensed third party cannabis growers.

Corey Wiegand, CEO, stated “We are activating five projects which we foresee will total 125,000 square feet. We are in negotiations with lenders, land owners and growers. >> FULL PR

Another company that is newly taking the plunge into the marijuana sector, is OSLH. In this case, it’s by way of partnering with a well-known Californian dispensary, “The Natural Way of L.A.”. After dipping its toes in the water, so to speak, the company intends to explore other opportunities relating to Colorado and Washington, the two states which have already green-lighted recreational use marijuana. Colorado, as you well know, began legal sales at the beginning of 2014, and Washington is slated to begin its own in June.

OSLH looks strong in premarket trading this morning. This is definitely a high-potential play to kick off the week, from the current looks of things.

ORANGEBURG, New York, March 10, 2014 /PRNewswire via COMTEX/ — OSL Holdings Inc. (http://www.oslholdings.com), (OTCQB: OSLH) (“OSL” or the “Company”), a technology company, announced today its entry into the legal marijuana market. OSL Holdings has contracted with one of the oldest legal medical marijuana dispensaries in California, The Natural Way of LA, to develop marijuana production facilities in California. OSL intends to form a separate subsidiary to create production facilities in states that presently have legal medical marijuana dispensaries and also position itself to accommodate the growing recreational markets in Colorado and Washington and elsewhere as legal recreational markets emerge. >>FULL PR

PLUG is definitely going down as one of our most successful picks of all time. Let us give the short rundown of our history with this play. Beginning in mid-February of 2013, we began tracking this stock, and around that time, we observed a low of .1155. PLUG spent the rest of 2013 rising gradually, and by the end of the year, had already broken the 2.00-mark.

By the beginning of this year, PLUG had taken another several leaps forward, and at the end of last month, reached a high of 4.64. Even then, our potential max gains on this play were an astounding 3,917% but PLUG was only just beginning to heat up.

On Friday the stock reached a new high of 8.35! That marks a hefty 80% increase from our alert on 02/27, and an incredible overall move of 7129% from our initial alert low, and that doesn’t even include the increases we are seeing in positive premarket trading action this morning. 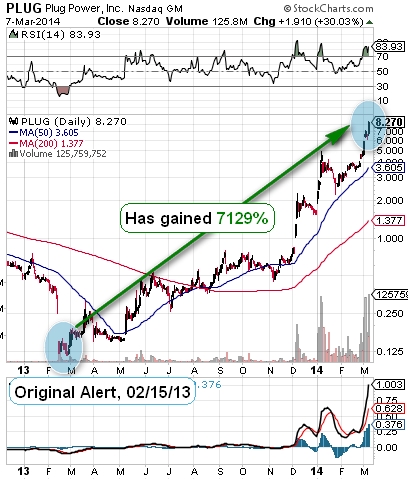 Part of the reason PLUG got another boost, could have been the vast exposure the company got on Friday when CEO Andy Marsh appeared in a CNBC interview. Check that out to learn more about the company and the direction in which it’s headed.

At the beginning of August, ARO began to experience a substantial sell-off that would cause the stock to fall from the $15-range to less than $8 at the beginning of this month. We are standing at the ready this morning as we’ve observed some northward pre-market trading, with shares changing hands for as much as 10.13. The significant gaps on the chart being filled could provide not only opportunities on the stock side of things, but in the trading of options contracts as well.

The 10/19 $9.00 Calls are of particular interest to us; Closing at .35 yesterday, and with this morning’s gap-up activity, these calls could open up as much as 100%  In that event, we would be looking for a consolidation before getting our feet wet.

RMTI would make a nice intraday move for us after its appearance in yesterday’s morning report, running from a low of 8.75 and reaching its peak at 11.80, good enough for a 35% gain.

Following the high, the stock came back as low as 9.85. Moving we are looking for the stock to hold support at its previous swing low of 8.75. In the meantime the company released an encouraging PR today announcing the completion of an important step in getting a new kidney drug to market, that appears to be contributing to yet another gap-up situation today.

For almost a year now, we’ve placed a strong focus on marijuana-related stocks, publishing several reports, and doing the most recent followup at the end of August. The industry has, and we believe, will continue to bring us profits in the future. It’s for that reason we suggest everyone keep a marijuana stock watchlist of their own. We have only just begun to realize the potential for this up-and-coming sector, which is certain to be a high-growth area for years to come.