After witnessing intraday gains from 380-650% from the range of TRIP Weekly Calls we tagged for tracking on Wednesday (as well as a 120% pop from the 10/30 $85 Calls we also signaled) , we continued to monitor those contracts yesterday and were met with further opportunities.

The majority of the open interest in the original range of contracts we highlighted (78.50-82.50 Calls) fell in the $80’s and above, and that’s also where we’ll want to see the stock maintain support on any pullbacks. We’ll continue to look for action there as the week draws to a close.

We’ll also continue to keep an eye on the 10/30 $85 Calls over the next couple of weeks leading up to their expiration.

Youku Todou, Inc. YOKU Is gapping up considerably in the premarket after Alibaba (BABA) submitted an offer to buy the company’s streaming video service. We’ll be looking for action in the Weekly $23-26 Calls, as well as a longer-term idea of the 10/06 $27 Calls in the event of a sustained breakout.

*Just to float the usual reminder for a Friday session: Volatility rises in options contracts with a weekly expiration which heightens the risk-reward factor considerably, so extreme caution should be exercised.

We flagged SIRG in yesterday’s extended watchlist, and the stock had a heck of a session, hurtling out of super-subpenny territory. From an early morning low of .0007, the stock stair-stepped its way to an afternoon high of .0015.

That registered as an intraday gain of 114% and the move occurred on volume which exceeded the monthly average by approximately three times.

Speaking of super-subpenny movers that we’ve been tracking; Manzo Pharmaceuticals, Inc. MNZO appeared on our watchlist last Wednesday and has since produced a healthy swing. We observed a low of .0003 subsequent to our mention of the stock, followed by a high of .001, which is equal to a 233%

Both this and SIRG serve as good examples of why we’d never completely abandon speculation in subpenny stocks. There’s always a chance that the next high-flyer is just around the corner, and as you can see, the possible gains over a short period can be quite substantial.

EGYH presented us with a tremendous swing-trade opportunity after we began tracking the stock last week. It started off as a subpenny play, and following a low of .0081 a week ago today, it barreled its way past the one cent mark and well into pennyland.

The excellent five-session swing from .0081 to yesterday’s new high of .03 represents a move of 270% so congratulations to anyone who took advantage of even a portion of of those gains. We’ll continue to track the progress of EGYH provided it can maintain support above previous resistance at around .02.

PPCH has appeared in our reports many times in the past, and most recently, we re-alerted and began tracking the stock at the end of last week. After an appearance in Friday’s extended watchlist the stock made its way down to a low of .0276 just prior to the close, and it hasn’t looked back since.

PPCH followed that swing-low with two consecutive bullish sessions, culminating in yesterday’s high of .0459 just before the end of the trading day. That registers as a 66% swing in slightly over two sessions, and it also logged considerably higher-than-average volume over that span as well.

We’ll look for PPCH to continue stringing together sessions of higher highs and higher lows, helped along by this recent surge in upward momentum.

Speaking of old favorites, we’re revisiting another stock that has appeared numerous times (83 times including this morning, to be precise!) in our reports, and for good reason. Quite awhile back, we caught it coming off what was then its ten-year lows, and leveraged the recovery into thousands upon thousands in percentage gains via the options chain. If you’re a newer subscriber, feel free to go through our PBR archives to see just what we’re talking about.

We want to come back to PBR after all this time, because it has recently set a new 12-year low just prior to the beginnings of a rebound. The chart is ripening, as we’ve pointed out below, so we feel that now would be a good time to track some options calls. 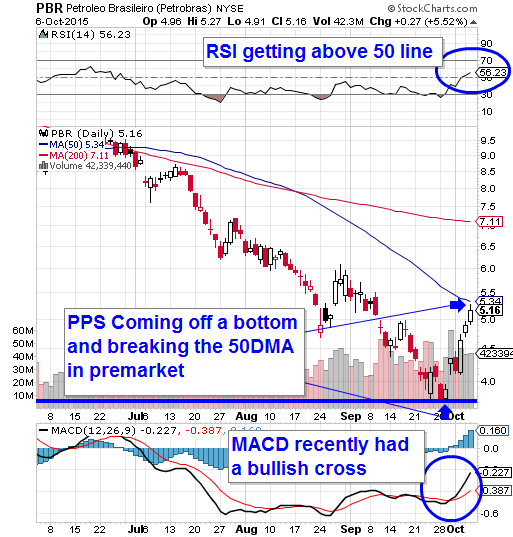 To take advantage of a continued uptrend, we’re going to zero in on PBR Weekly $5.00 and $5.50 Calls for the moment. In the event that PBR manages to break past 5.75, we’d likely be looking at rolling our strike price up to the $6’s.