EFFI was the standout play from yesterday’s daily report; we gained interest in this familiar play after noticing some abnormal volume and a PPS spike during Friday’s session.

The momentum it had built up was able to carry over into this new trading week, as the stock made its way from a low of .004 to .0056. It marked an intraday swing of 40% and puts us on alert for the possibility of further advances.

In terms of the technicals, the RSI just cracked into the power zone and the MACD is still bullish in appearance, with some serious upward divergence currently in effect. Provided the stock can continue to register higher lows on its way up, we’ll reserve space for it on our working watchlist. 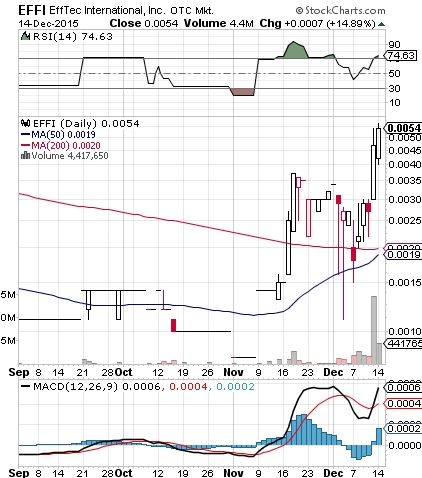 RAS has come to our attention as a stock that has been plummeting of late, and we’re beginning to speculate as to how long the decline can continue. Though it may still have a ways to fall before ultimately reversing, we want to place it on a close bottom-watch as we feel the eventual rebound could produce palpable upward swings, especially with such a large gap to fill on the chart (pointed out below). 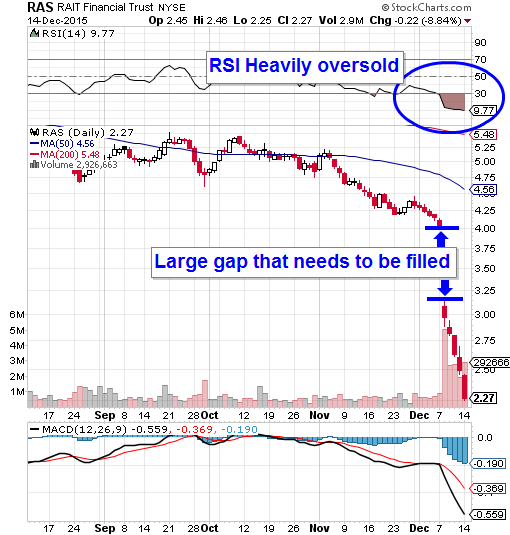 Hypothetically speaking, a return to its pre-gap levels would mean gains in excess of 75% over the current share price.

FDX is presently trading near a prior support level, and with earnings scheduled for the post-market tomorrow, we want to signal a possible options trading idea.

We’re going to want to radar contracts in the range of Weekly FDX $140-145 Calls today and tomorrow for activity running up to the earnings call, incidentally, in the midst of the busiest time of year for parcel deliveries. Things could get quite interesting for this play inside of the next 36 hours, so we’ll be sure to keep our eyes peeled.

You have to go a long way back to find our very first coverage of ARNA. It was May 11th, 2012 that we first mentioned this stock as an item to have on long-term watch. At that time the company had an obesity treatment that was awaiting FDA approval.

The public sentiment during that summer was that FDA approval was all but in the bag, and as we waited the stock began a monstrous run from a low of 5.44 to the day of its approval when it hit 13.50, an overall increase of 148% It would be a very long time before we talked about ARNA again.

The next time was fairly recently on November 3rd when we included ARNA on our Extended Watchlist, and over a period of a few sessions, saw the stock make a decent move from a low of 4.12 to 4.76. After that, it endured a series of incremental pullbacks over the next several weeks.

Yesterday morning, in a stroke of superb timing we tagged the stock in our watchlist once again, and what it did next blew the run we witnessed in November right out of the water!  Coinciding with the announcement of positive top-line results on another of the company’s treatments (this one for autoimmune disease) ARNA made a huge intraday run from a low of 3.66 to all the way up to 6.09. That’s a hefty 66% increase in a single session, and it came on approximately 20X the 3-month average volume, so cheers are in order for anyone who took advantage of our timely alert!

As we point out on the snapshot below, what has formed on the chart is known as a bullish flag, which is known to be a signal of further gains. Couple that with an RSI that’s screaming toward the power zone, and it makes HMCP one that we’ll really need to watch closely as we head into week’s end. 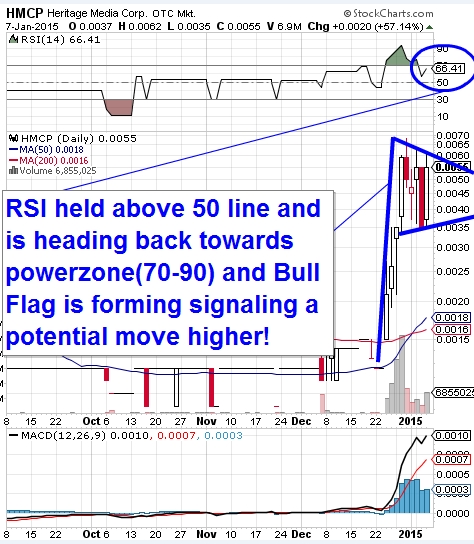 2015 is upon us and our first order of business is to address one of the stocks we tagged in Wednesday’s premarket report. BCLI had a strong session, as it pushed its way up from an early low of 4.02 to an aftyernoon high of 4.94; a solid +23% performance.

The strong session was apparently aided by the pre-emptive PR the company released which served as a reminder that results from Phase 2a trials of its ALS (Lou Gehrig’s Disease) treatment would be released on Monday. This morning the stock is gapping up wildly as anticipation grows, having already hit a premarket high of 7.28, which represents a total increase of 81% over the low we observed on New Year’s Eve.

Monday’s data release, which is expected to be positive, should most likely produce one of two effects. Either the results will beat expectations and facilitate another strong move, or they will fail to meet the mark and cause a pullback. In case of the latter, there may be rebound opportunities waiting just around the corner.

We also had this pair of standouts appear in Wednesday’s report, with each stock making a similar move. Both started the day with significant spikes in PPS, followed by a tapering off into the close.

RDHL made a sensational jump beginning almost immediately at the open running from 12.52 on up to 17.85 before its pullback, an intraday spike equaling 42.5%. Coincidentally, the stock ended the session having traded 42.5X its 3-month average volume.