In what is shaking out to be a characteristically slow short week for stocks in general, we’re going to adjust our focus a bit and turn to UGAZ. This triple-leveraged natural gas bull ETN has been gaining momentum and rebounding nicely off of its recently-established 52-week lows.

We’ll look for UGAZ to continue registering higher lows and higher highs, and make its way toward the 50DMA of 3.06. As we’ve pointed out on the chart below, there are a number of bullish indicators drawing our attention. 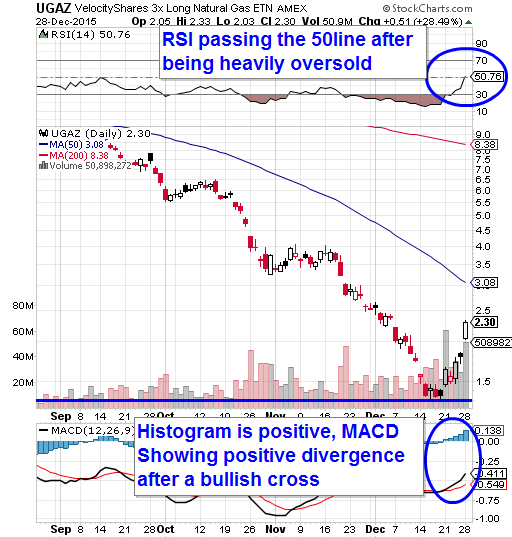 We’d also consider this idea to have a seasonal advantage as we are heading into the two coldest months of the year; the time when natural gas consumption rate is at its annual peak. We’ll eagerly place this note on watch in coming weeks to see how it responds to rising natural gas demand.

We placed FXCM on watch exactly two weeks ago and at the time, we observed a low of 6.68 in the stock and it never looked back. In the ten sessions since that alert, it has made some very impressive leaps and bounds.

The activity culminated in a new milestone for FXCM during yesterday’s session as it reached as high as 19.74, which represented a remarkable swing of 196%