Having written our daily newsletters for such a long time, occasionally we run back across a stock that we haven’t seen in quite some time, and that was the case with BMXI. Before yesterday’s signal on it, we hadn’t mentioned it since May of 2012 back when it was regularly trading in the subpenny range.

It found its way to our radar screens and into our premarket report yesterday morning on word of a promotion (Disclosure: We were not involved in the deal), and what followed was one of the biggest breakouts the stock has ever had. From a low of .0831 it soared to a new all-time high of .1279 . That’s an intraday gain of 54% which came on enormous volume.

Our regular followers know that we’re always on the lookout to take advantage of the hype-fueled moves that stocks tend to make following an earnings report, using their options chains. Delta whiffed on profits this quarter, falling well short of expectations on the Street, and despite issuing solid guidance for Q3, we want to signal a range of short-term puts to watch into the end of the week.

DAL stock was already at a top, and in a price range where profit-takers could be a factor as well. For that reason, we are going to radar the DAL Weekly $55.50-53.50 Puts.

OBMP had an update that it issued this morning on its mid-stage cancer treatment (>>View PR), but our interest is really being drawn to this play for technical reasons.

As you can see below, the stock recently established a new annual low, followed by a rebound off of that low, and now it is making its way back down to find support. We will be interested in this as a potential rebound play in the event that the stock maintains support at or above a nickel. We’re presently looking at an impending bearish cross on the MACD so we’ll see if the stock can hang in there without losing more than a penny off of its current PPS. 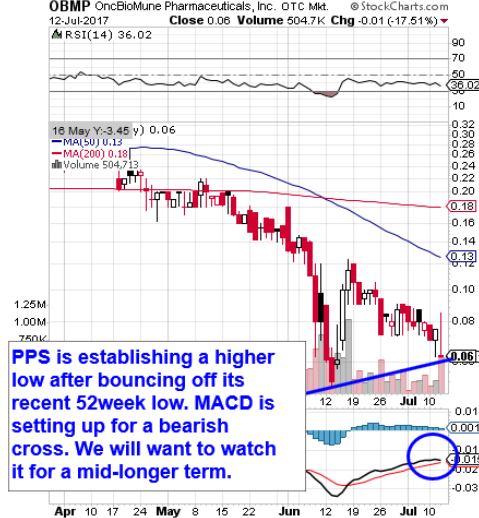 It’s about time that we came back to rehash one of our top performing stocks of the month in FNHI this morning. We’ve been continuously monitoring this play all February, since our initial alert which came on the 8th, subsequent to which we would observe a low of .0061 in the stock. We continued to follow up on this play, including reminders in last Friday’s report, and on Tuesday as well.

It’s been quite a ride since then, as FNHI has gone on to barrel into Pennyland, and eventually break both the two and three cent marks.

Yesterday the stock reached an impressive new high of .0357, which represents an overall upswing of 485% in just a shade over two weeks! Big congratulations go out to anyone who got involved and reaped some serious rewards off of this fantastic subpenny-to-penny mover!

We spotted a potential recovery play in NAK, which has gotten beaten up in recent sessions, but is exhibiting the traits of a stock that could be headed back up in sessions to come.

Whenever we see a bottom-bouncing stock which has established support at a previous resistance level, especially one this oversold, we’re always on the lookout for the possibility of a rebound. We’re going to keep NAK on our radars indefinitely, as we feel that a significant push back to the upside could be just a matter of time. 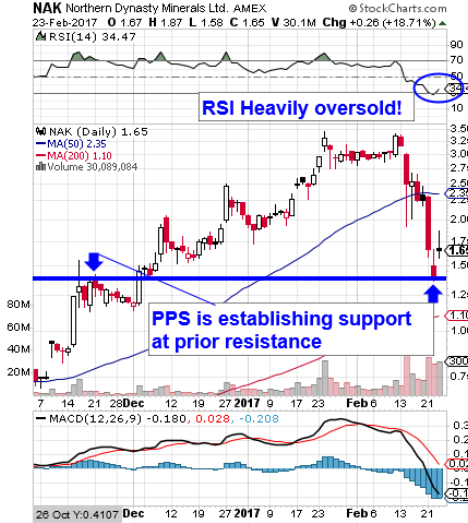 Foot Locker, Inc. FL – For a quick options trading idea this morning, we’re going to signal a range of longer-term contracts in the Foot Locker chain. Our targets, the FL 03/17 $70-75 Calls will have plenty of time to see the type of activity we’re looking for, with exactly three weeks until expiration.

We tagged CETX as a bottom play in yesterday’s report, and we just wanted to update readers on its healthy performance. The stock traded up from a daily low of 3.51 to 4.43, a gain of 26% which is a good start to the recovery we were hoping to see.

We’ll continue to have our eyes on this one, as a return to 5, 6, or perhaps even 7 dollars is not out of the realm of possibility in weeks to come.