After zeroing in on FCGD in yesterday’s premarket report, the activity that followed was encouraging. The stock traded up on light volume, to the tune of a 30% intraday jump from .075 to .098; a good indicator of the kind of reactions and potential gains we can expect from it moving forward. Any increased buying pressure has a chance to produce price increases even more drastic than what we saw yesterday.

Don’t forget that we conducted an exclusive interview with FCGD’s new CEO Jason Castenir yesterday through our sister site, Stock Traders Talk. Follow the link above or the graphic below to hear over 20 minutes of exclusive content on FCGD straight from the source. 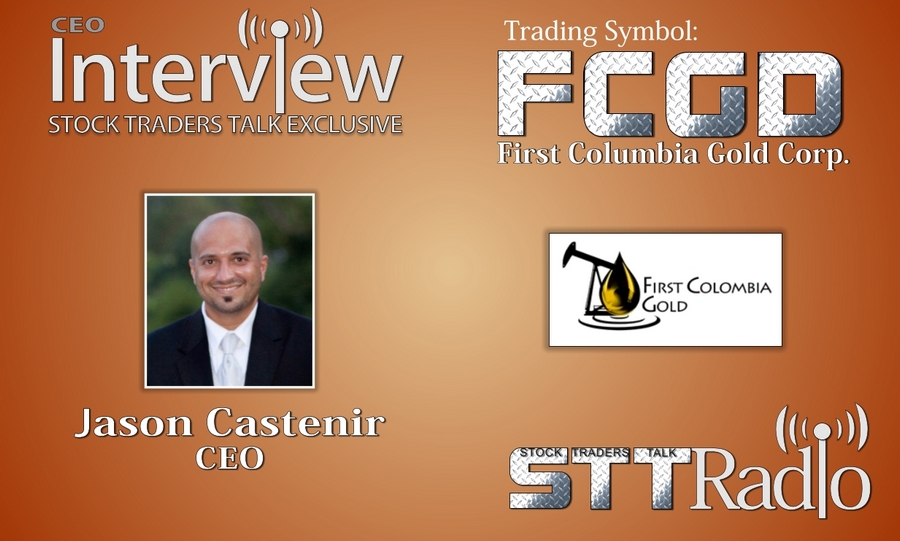 Here we point out a few of the key highlights of the FCGD Chart: 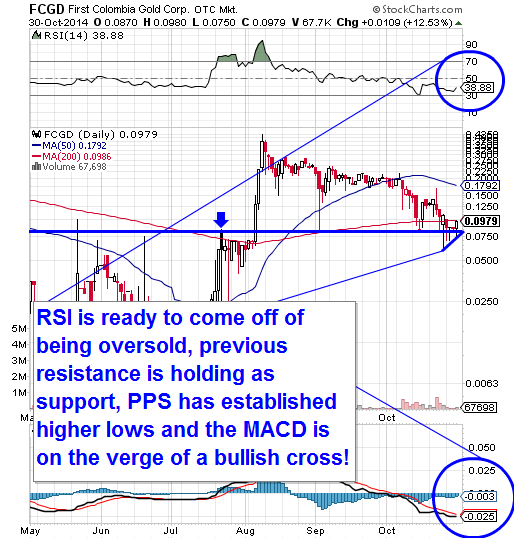 With our primary focus being on FCGD yesterday we didn’t have a chance to congratulate our members who were able to take advantage of one of our ideas from the prior session. After we caught MEA on Wednesday’s Extended Watchlist, the stock blasted off from a low of .381 all the way .667, a solid 75% intraday run.

Yesterday the stock fell back to bounce off of support at .53 and made a modest rebound to .59.

We try to remind our readers as much as we can, that whether you’re a subscriber to our daily email reports, or view our content on Third-Party websites, that it’s always important to check our blog at Blue Horseshoe Stocks on a daily basis.

Yesterday provided a good example of why; with our main attention going to FCGD, the additional symbols on our radar that would normally go into an Extended Watchlist, were relegated to the sidebar tracker on Blue Horseshoe Stocks, as pictured in the following snapshot taken yesterday afternoon: 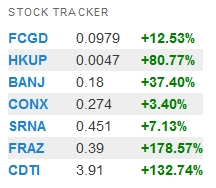 As you can see, anyone who visited our page during the day yesterday could have caught any one of a number big movers:

We keep going back to the well that is the PBR options chain, and almost never come up empty-handed. Just to recap this week’s action, we targeted the PBR November $16 Calls on Tuesday morning, and were promptly rewarded with an 35% intraday spike.

On Wednesday, we commented on the real possibility of seeing more action in PBR options as the stock pulled back and rebounded, and it only took until yesterday’s session to see that prediction met.

First Liberty Power Corp. FLPC
FLPC made a notable move right at the start of the session yesterday morning, opening up at .002 and rapidly running to .0027. That marked a quick chance at up to 35% in gains.

The overall markets took a pounding yesterday, and after a contrary performance by TSLA which managed a positive move, the stock is pulling back today to a premarket low of 240.56. As long as support holds at that range, we’ll be expecting to see a bounce. If that proves to be the case, we’ll need to identify a proper options trading target.

Likewise, we’re looking for an upcoming bounce on the SPY which got drudged down along with the market yesterday. We may have an interest in trading SPY Calls, and should be ready for a rebound to come at any time.

SPIR (On Bottom-Watch)
We want to quickly make a note of SPIR as well. The stock fell to new 52-week lows yesterday; we always like to monitor plays like these for potential bottom bounces.

Wednesday was a pretty good day for a couple plays off of our watchlist; top billing goes to an ETF rather than a stock.

We tagged JNUG (gold miner’s bull index) and were pleased at the scope of the run we witnessed. Over an impressive daily range from 8.43 to 12.35, it offered us the chance at gains in excess of 46%

Meanwhile, UNIS registered a solid 25% intraday move as it spiked from a morning low of 2.78 on up to 3.49. Both plays blew their 3-month average trading volume out of the water for the day.

We also want to flag FLPC today for a number of different reasons. This subpenny stock is coming off of a recent bottom, and has recorded higher lows and higher highs for the last 4 consecutive sessions. Yesterday it broke above its 50DMA (.002), and we’re going to be looking for support to hold at or above that mark in order for us to remain interested.

A quick view of the chart reveals some of the potential of FLPC: 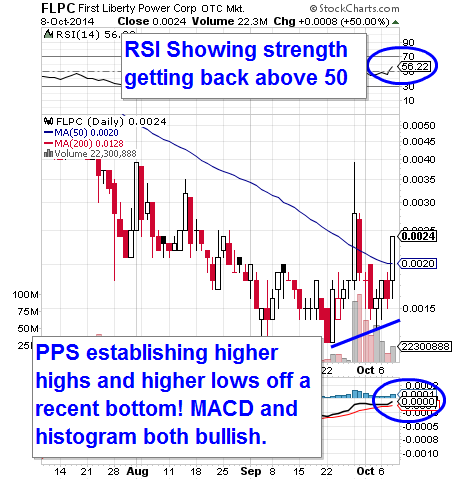