After catching a PR containing some big merger news for SNTA yesterday morning, we decided to include the stock in our premarket report, and it turned out to be a good decision.

On just under 12X the 3-month average trading volume, SNTA ran from a daily low of .32 up to .45 inside of the first 90 minutes of the session. That registered as a respectable intraday spike of 41% As measured to this morning’s premarket high of .488, that figure is extended to 53%

We’ll have our eyes peeled for another push this morning. The type of volume that we witnessed yesterday coupled with the stock holding more than 50% of its daily gains, puts SNTA into the category of a possible momentum play.

We are also going to be monitoring the activity in a couple of other pharma stocks in coming sessions:  Aoxing Pharmaceutical Co., Inc. AXN and Eleven Biotherapeutics, Inc. EBIO

EBIO is reportedly another reverse-merger candidate that caught a wave of momentum on the heels of yesterday’s big news, and AXN is showing a double-bottom signal and has been making headway trading up off of its lows for the past few sessions. We’ll want to monitor both of these plays into next week.

It wouldn’t be a typical Friday without a end-of-week options idea, so we’re going to turn to one of our classic targets- the SPY. Here in the premarket we’ve observed a low of 207.58. How we’ll want to play it is this: Should the SPY maintain support at 207.50 or above on any early pullbacks, we’re going to be interested in the Weekly $207.50-208 Calls. In the event it fails to hold support a that point, we’ll look to the Weekly $208-207.50 Puts.

*CAUTION: Trading weekly options on Friday is commonly a very high risk proposition. To be attempted by advanced traders only!

AXN emerged as one of the day’s most interesting plays following its inclusion in Friday morning’s premarket report. After briefly touching an early morning low of 1.15, the stock would go on to register a subsequent high of 1.63.

That works out to an intraday increase of 42%, and it came on roughly fourteen times the three-month average volume.

After a fairly strong close (1.49) in which the stock held well over half of its daily gains, AXN appears to be gapping up slightly this morning, having risen back into the 1.50’s. This type of activity is characteristic of a classic “momo play”, so we’ll have an eye peeled for AXN as things kick off today to watch for a possible continuation of that momentum.

When PVSP appeared in one of our daily reports in late January, we referred to it as a super-subpenny ‘bottom-bouncer’, and it has held to that description in the truest sense over the past several weeks. Less than two weeks ago, the stock was trading at the lowest possible increment (.0001), and toward the end of last week it began to ramp its way up.

On Friday, there was a Golden Cross of the 50DMA over the 200DMA, and PVSP traded as high as .0009, which marks a rapid jump of 800% over our recently observed low. In order for us to remain interested in this play, it will need to maintain support at or above .0005 on any pullbacks.

JDST made a modest yet notable move on Friday as well., This one also appeared on our extended watchlist, and we were pleased with its steady uptrend that lasted  throughout most of the morning.

Being a gold miners bear ETF, JDST saw this increase as the release of healthy jobs numbers and the Dollar at an 11-year high coincided closely with gold nearing a three-month low. 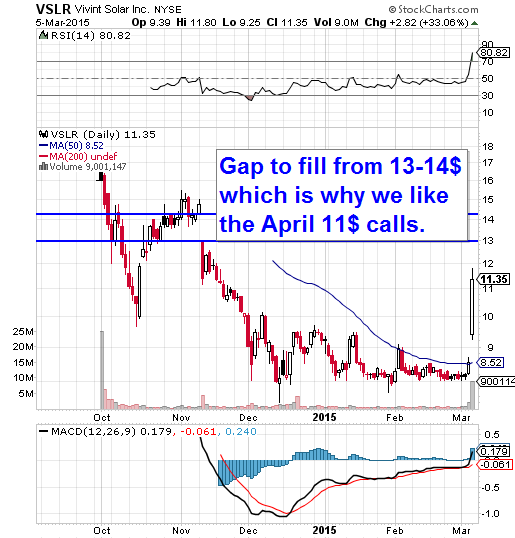 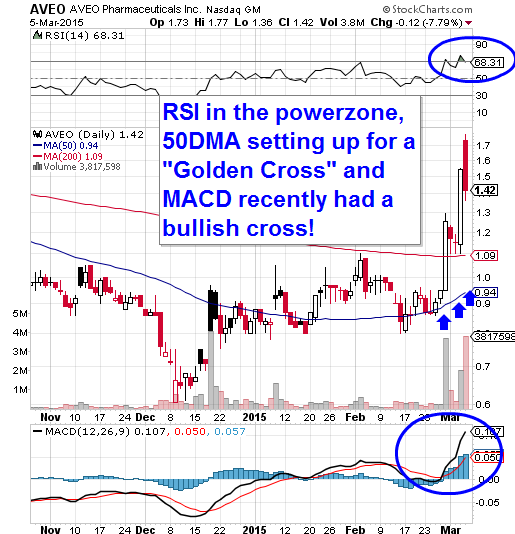