Fresh for yesterday morning’s premarket report, we jumped on the FIVE options chain with some quick-strike ideas in the FIVE Weekly $125-127 Calls and after an impressive $5+ intraday run for the stock itself, all three of those ideas bore fruit instantly. We wanted to recap the performance this morning, as well as update our idea for this play.

With FIVE gapping up again in the premarket today, we expect to see further gains from the above-mentioned contract sets, but we also want to roll up our potential strike prices a bit to follow the money a little closer. We’ll include the FIVE 04/05 $128-129 Calls in our pool of ideas going forward.

BlackBerry Ltd. BB – Fresh off of the scanner this morning, we’ve got BlackBerry making waves in the premarket after a solid beat on revs and profits, in a quarterly release that included record software IP licensing. We’re going to keep an eye on the BB Weekly $9-10 Calls*.
_____

CarMax, Inc. KMX – CarMax also reported this morning, and it too is moving the needle in the premarket on the heels of a beat on profits. We’re going to add the KMX Weekly $65.50-67 Calls* to our tracklist for today as well.

*DO NOT attempt to trade weekly contracts on a Friday unless you an advanced level trader with access to disposable funds!

Despite the holiday lull this week, we did manage to unearth one interesting play coming off of 4th of July break, which was the sole focus of yesterday morning’s premarket report.

Apart from the big news of a $1B refinancing plan (>>View PR), ANW was exhibiting the telltale signs of an oversold stock ready to rebound, and sure enough, it moved to partially fill the large gap on the chart to the upside. The stock traded from a low of 1.22 and subsequently hit a high of 2.05, which represents an intraday upswing of 68%

The stock fell just a penny shy of its 50DMA yesterday, and with a significant portion of its gap still left to fill, we’ll want to continue to track its movements for the time being.

We’ve had our eye on TSLA for the past few sessions as the stock was spiraling downward. At this point in time, we feel it too may in line for a forthcoming recovery swing, and w want to have an options idea handy for such an event.

We caught GALT for chances at some really nice gains last month as we tagged the stock on June 12th at a low of 5.83. It went on to register a high of 9.49 (+63%) in the days following that report,. After a period of consolidation of leading into this week, the stock has begun to show signs of perhaps its next leg up.

We’ve pointed out why we’re attracted to the current setup of the chart on the snapshot below: 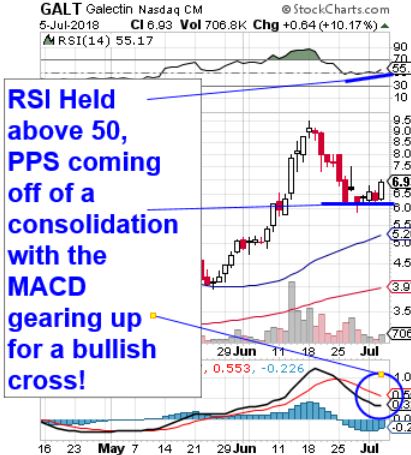