When we began pounding the table on APP on Wednesday this week, it was for good reason. On that day we observed a low of .63. The chart was sending out bullish signals left, right, and center, and yesterday proved to be quite a day as the stock made a 58% intraday move from .72-1.14. That high also marked an overall increase of 81% over the low we witnessed the session prior.

APP is maintaining a majority of those gains, trading above a dollar in the premarket today so we’ve been provided with plenty of opportunity to take profits as the stock is on its way up. It remains to be seen if new CEO Paula Schneider can right the ship over time, but for now APP has given us the chance at some excellent short term gains.

Per the chart, 1.20 and 1.30 appear to be the next key areas of resistance. In order for us to remain interested in APP moving forward, we’ll need to see it maintain support at or above the .85-1.00 range. 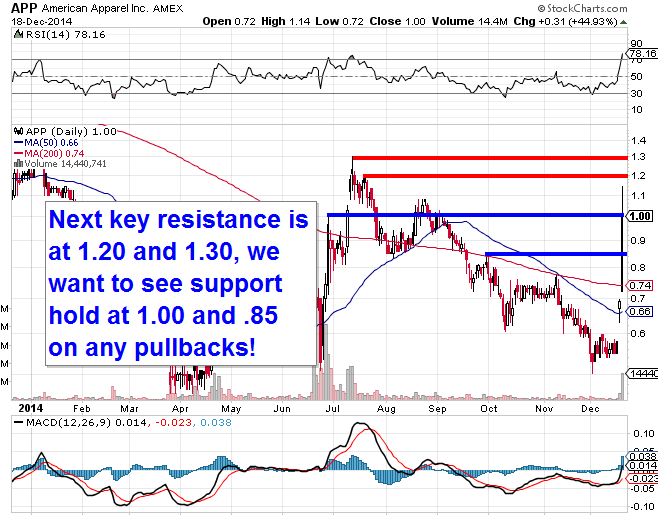 We’ve tracked JNUG regularly this fall, and after tagging it in both Tuesday’s and yesterday’s extended watchlist, this ETF has gained a sizable bit of ground. Tuesday’s low was set at 1.82, meaning that as of yesterday’s high at 2.78, we saw a 53% increase out of JNUG over just a three-session span. That low also marked the 52-week low, so our timing here really couldn’t have been any better.

We also want to note that per a recent PR, Direxion will be enacting a 1-for-10 reverse split of the shares of JNUG on Dec. 23rd (This Tuesday).

Other Notable Movers From Yesterday’s Report

Our Monday morning report this week included AEZS as a potential bottom play which we did end up timing perfectly, seeing an 18% intraday move (.55-.65) during that session.

We also focused in on AEZS yesterday morning, mentioning that further opportunities appeared possible, and were rewarded for the second straight day. The stock traded in a range from .67-.79, which registered as another 18% intraday jump.

Yesterday’s high marked an overall increase of 43% and provided an excellent example of why the setting of new all-time lows in a given stock is a phenomenon that will draw our attention every time.

We’ll continue to monitor this play as the week progresses, but all in all, we consider it to be a success already, with the chances it has given us to make solid gains over a period of just two days.

We wanted to update readers on another stock we’ve been monitoring over the last week- TASR has also provided a modest opportunity over the past couple of sessions. The stock bounced off of support at 20.79 on Monday, and yesterday managed to push its way to a high of 24.44, a notable 17.5% increase.

Amid allegations of money-laundering and bribery which extend high up into the Brazilian government (including former PBR board member and President Dilma Rousseff) the sixth-largest energy company in the world, and a point of focus for us all year, could be forced to write down billions in assets and reduce dividends. The company’s Q3 financials are being delayed indefinitely as a result.

The long-term implications of such a scandal are too vast and varied for us to make even a brief assessment accurately. What we can do is stay extra tuned to the PBR newsfeed to stay as up-to-date as possible on current events and adhere to our technicals, because we can still see potential on the chart.

On Tuesday, PBR hit its all-time low of 8.80. but has since made higher lows and higher highs over the proceeding sessions. After we tagged it on Friday morning, there was a 9% intraday move from 10.08 to $11, and this morning the premarket high is 11.51, which will act as immediate resistance as the session kicks off. We’ll want to see support hold at roughly 10.85, but if PBR can break past this morning’s high to confirm its continued uptrend, the next thing we’d be looking for is the filling of a gap on the chart from approximately $12-12.50.

As far as options go, we’re presently looking at the Jan 17th $10 and $11 Calls, provided the current trend continues.

RNA is a stock that we tracking periodically this spring and summer, and we just wanted to comment quickly on the buyout offer the company announced this morning. In a $680M deal, Prosensa will receive around $17.75/share from buyer BioMarin Pharmaceutical.

Following an alert we put out on RNA back in May, the stock was trading at a low of 7.96; this morning’s premarket high of $19 means we’ve seen more than a 130% move in this play over a span of about 5 months.