We decided to revisit AAPL Options yesterday morning just as the tech giant was coming off of a huge earnings beat that came post-market on Tuesday. If you recall, we highlighted Calls in the $113-117 area for potential intraday flip opportunities, and three sets of contracts in that range gave real standout performances with each making three significant swings over the course of the day. All of that price action added up to many fine chances for traders to reap sizable profits.

Here’s a look at specific figures of the kinds of gains that were possible, accompanied by a visual representation with the intraday charts: 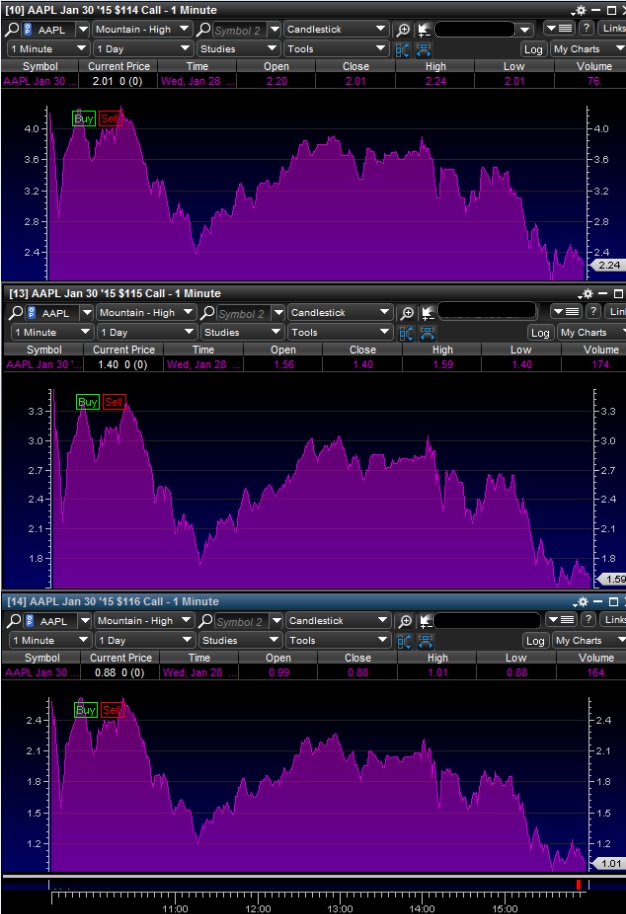 This scenario could not have been more textbook following a big earnings beat.  We’ve utilized this exact sort of trend on numerous occasions in the past, and as you can plainly see, it continues to be an effective strategy to this day.

We mentioned those contracts could be good for intraday and intraweek gains and we’re holding to that, so we’ll continue to have our eyes fixed on the AAPL Options Chain as the week draws to a close.

This morning, we are focusing on a stock that has appeared in our reports twice over the past couple of months, first on March 12th, at which time the stock was trading at .0055. Yesterday, we witnessed a high of .025, marking the chance at gains of up to 355% for anyone who was able to get in at or near the bottom.

Last year, this play had a spike that ranged from the .03-area all the way up to .125, so we are well aware of the stock’s potential to make huge gains, from current levels.

On the chart, .0185 was a key resistance area that was breached yesterday; following that point, we see resistance at .03, which was a key support level during that .03-.125 run.

It seems less often these days that people are talking about “green” companies and technologies, which is odd, considering the need for them is more dire than ever before. But Cleantech is just that: the company provides carbon footprint offset services, something that every single American should feel pressure, and responsibility to consider.

Every person living in a first-world country causes roughly twenty tons of carbon emissions each year (that means YOU)- just by using lights, driving a car, and performing other routine daily activities. CLNO offers a way for folks to neutralize their damaging effect on the only planet that we, or any of our offspring, will ever have.

To offset one’s annual carbon footprint, socially responsible individuals can purchase twenty EvoCerts™ on a yearly basis. EvoCerts™ were created for this purpose. Each one represents the stoppage of one ton of carbon emissions from going into the environment due to changes made at plants, mines, businesses, etc.

But not only that, and more importantly, each EvoCert™ provides for the perpetual care and maintenance of one GreenTree™, our proprietary tree. ​As  GreenTrees™ mature, in ever increasing amounts, they produce oxygen, and at the same time absorb carbon dioxide. This is in accord with nature’s own design for trees.

Continuing along with another environmental play, WPNV was as low as two cents following its appearance in yesterday’s morning’s extended watchlist.

It went on to hit a high of .029, for a possible intraday gain of 45% Congrats to anyone who caught that and was able to turn a profit.