AQXP was among the stocks that we presented in yesterday’s premarket report, as we were catching it a couple of days after some really positive developments were announced by the company. Despite already being up significantly at that point, our instincts to include it in our daily interests proved to be well-founded.

The stock made a monstrous move right out of the starting gate from 17.56-55.75, a walloping 217% initial rip, followed by an extreme pullback. The activity in AQXP was so abnormally volatile that trading was temporarily halted. AQXP stock is presently gapping up in premarket trading as high as 38.74 so far this morning.

Yesterday was an interesting session in that we noticed an unusually high number of stocks with which we are very familiar, making some excellent moves off of their recently-attained low-points.

FuelCell Energy, Inc. FCEL – FCEL had been on a continuous backslide for many weeks. The company released a positive PR (Link Below) and things took off from there, as you can see on the included chart. We’ll be looking for the stock to maintain at least half of the advance it made yesterday on any pullbacks. 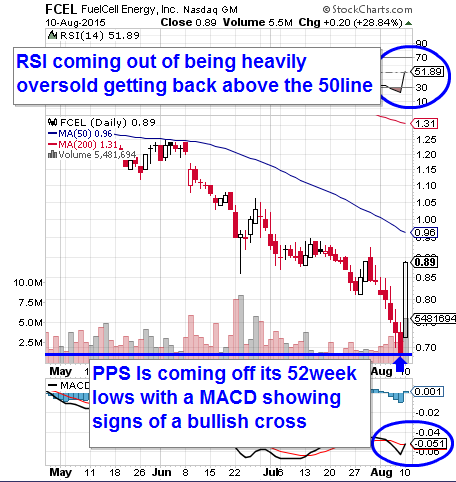 INO also had a big day generated by a PR. The company entered into a partnership with AstraZeneca to provide its cancer treatment in a deal that could reportedly bring as much as $700M in revenue INO’s way. (>>>Get More Details). We are well-acquainted with this stock, having last mentioned it just a couple of weeks ago. We’ll be keen to track the ensuing activity after yesterday’s major revelation, and roughly 30% increase on the day.

Other stocks that we routinely discuss that also made appreciable moves off of relative lows yesterday were Voltari Corp. VLTC, Dominovas Energy Corp. DNRG, and Ascent Solar Technologies, Inc. ASTI. Those familiar bottom-bouncers were joined by New Source Energy Partners. NSLP, a newcomer to our reports. We’ll be watching the whole lot as the week progresses. Continued gains, as well as possible dip-and-rip scenarios could be in the cards for any and/or all of them!

We’ve got a nice selection of new options-trading possibilities to enter into the mix today:

Shake Shack, Inc. SHAK –  Shake Shack beat on earnings  yesterday and is gapping up in the premarket today. As a result we are going to be taking a look at Weekly $72-76 Calls for potential chances at intraday/intraweek flips.

Apple, Inc. AAPL –  We’ve had a lot of success with AAPL Options in both the distant and recent past, and a new, longer-term idea to monitor in coming weeks is going to be the Sept. 18th $120-122 Calls.

Twitter, Inc. TWTR – For a prospective idea in the TWTR chain, we’ll stretch our target period out to that same Sept. 18th expiration, and track the 9/18 TWTR $30-32 Calls.