We’ve got a trio of pharma plays to add to our watchlist on the heels of fresh news releases for each of them this morning. Each stock is gapping up significantly in the premarket, and we’ll be waiting in the wings once the session commences to see if we can use the resulting activity to our advantage.

Akebia Therapeutics, Inc. AKBA – Per the newly announced agreement out today, AKBA has entered into a Collaboration and License Agreement to carry forward with the development of one of its treatments. The deal comes with an immediate payment of $125M, a cash infusion that represents roughly 40% of the company’s total market cap as of yesterday.

ACADIA Pharmaceuticals, Inc. ACAD – In the case of ACAD, we’ve gotten word of positive top-line results in a Phase II study it was conducting on the company’s Alzheimer’s drug.  To leverage the present activity to our advantage here, we’re going to track the ACAD Weekly $28-31 Calls. (>>View PR)

Here we have another collaboration and licensing deal, for CNAT’s liver drug, which is going to be bringing a $50M cash infusion Conatus’ way. That’s just the initial tranche, with more payments to follow as outlined in the relevant filing (>>View 8-K)

We put GSAT on watch as a possible momentum play in yesterday morning’s premarket report, and while it didn’t break out in a major way, it did continue the trend of solid upward momentum that has been observed in recent sessions. From an early low of 1.25, the stock ran as high as 1.60; a 28% pop.

The performance, while not astronomical, was certainly enough to hold our interest in continuing to monitor GSAT’s activity moving forward.

We just wanted to take a quick moment to reiterate a possible bottom-play selection we made last week in the form of CLRB. We’re still tracking this one, and think it has a good chance to produce a recovery, possibly following the holiday break. So we’re going to want to leave a space on our watch screens reserved for CLRB in the days and weeks ahead.

We alerted KBLB in Wednesday morning’s premarket report, and on that day, we would observe a PPS low of .0261. Yesterday, the stock hit a high of .0395, for a respectable two-session upswing of 51%

Following that solid run-up, we saw the stock close at .0375, maintaining a vast majority of its advance. We’ll continue to keep a steady eye on KBLB, and look for it to maintain support above the .03-mark in order to keep us interested.

Rennova Health, Inc. RNVA – We have an interesting story unfolding with RNVA, and a potential rebound opportunity as well. After briefly cracking its 50DMA on Wednesday, the stock took a major gut punch yesterday as it gapped down immensely.

It seems a bit of an overreaction after reading the PR that apparently catalyzed the selloff. The company announced yesterday that it had priced a public offering with the intent of raising upwards of $8.6M in capital, expected to close by Tuesday. They set the purchase price at .45, which is why a massive slide to less than .30 seemed disproportionate.

We’ll be interested to see the activity in this now majorly-oversold stock in sessions to come. 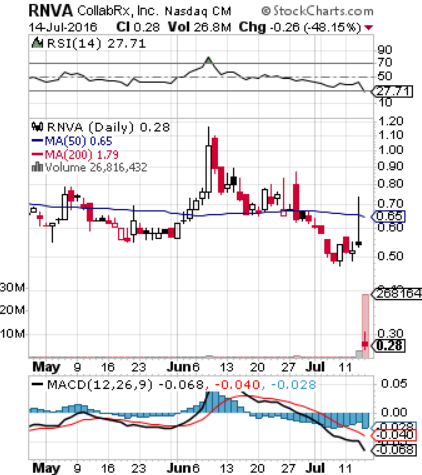 Ampio Pharmaceuticals, Inc. AMPE – Speaking of stocks that have recently gapped down hard and found new lows, we have AMPE hitting our bottom-play radar.

Similar to the aforementioned play, the selloff occurred as a result of what some might construe as over-reactive. The company released data from a clinical study at the end of last month on its osteoarthritis injection treatment that was poorly-received.  However, while the primary endpoints of the double-blind study were not met, the treatment was markedly effective in improving the patients with the most extreme cases of the condition.

So the study was not a total loss, and the company made clear its intent to submit an FDA application for the treatment for those severely afflicted patients that were helped, and for whom no other non-surgical alternative exists.

That’s why we’ll be keeping an eye on AMPE to continue to regain some of its lost ground, as it has done over the past few sessions. 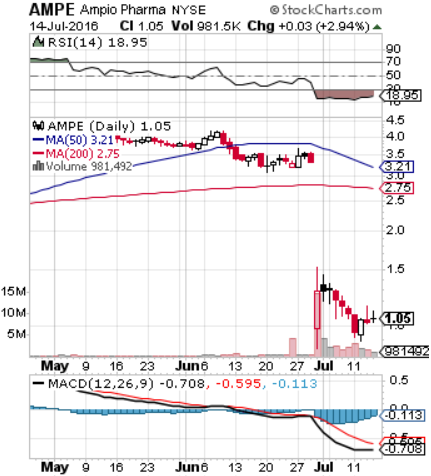