After noticing the stock’s significant premarket bullishness, we placed TBIO in yesterday morning’s report, and it’s a good thing that we did. It responded with a meteoric rise on the day en route to a very strong close.

TBIO traded in a daily range from a low of .67 up as high as 1.27, making intraday gains of up 90% possible, and the activity came on a torrent of volume, in the neighborhood of more than 37X the 3-month average volume.

TBIO continued to plow upward in post-market trading, and this morning has changed hands for as much as 1.64 a share in the premarket. Given the present circumstances, we wouldn’t be at all surprised to see the stock attain new highs once again today.

We were also keeping an eye on PURA, listing it in yesterday’s watchlist, and the stock recorded a modest yet solid session. On roughly eight times the monthly average, it traded up from a low of  .037 to .0482, a 30% increase.

PURA has been on a fairly steady upswing for most of this month so far, yesterday’s activity just being an extension of that pattern, so we’ll be on the lookout for a continuation of that current trend.

We want to signal APHB as a possible bottom-bounce play this morning. Between it just showing a flicker of life off of recent relative lows, and the fact that it was trading at triple its current value just three months ago, we definitely want to keep this one on watch.

We’ve included a snap of the current chart, which illustrates what we’re talking about. This has the potential to become a solid recovery play in the days and/or weeks ahead. 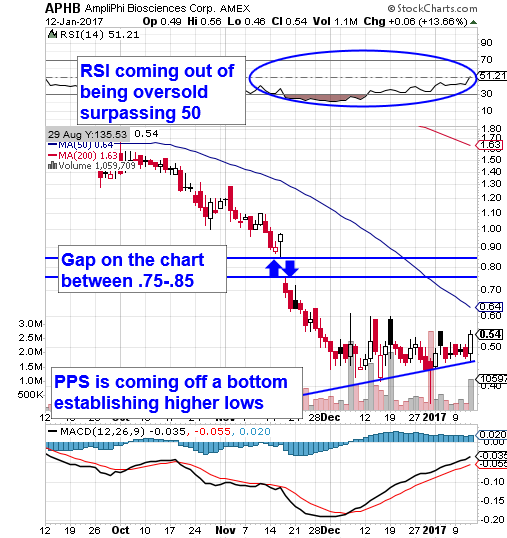 We began tracking IMMY as it was coming off of recent relative lows on Thursday morning, and at the time the stock saw a low of 2.12 before continuing the bottom-bounce that initially drew our attention.

That trend continued on Friday, as we suggested it might in our premarket report, with IMMY adding a solid session wherein the stock pushed its way from a low of 2.50 to a new high of 3.05. It went down in the books as an intraday increase of 22%, and a two-day swing of 44% over our observed low from Thursday.

Wednesday morning’s premarket report was when we caught on with MMEG, and after making a nice two-day swing of 123% from a low of .0017 to .0038 on Wednesday and Thursday, the stock continued to push upward on Friday and secured multi-day runner status.

We tagged YIPI in Friday’s extended watchlist, catching the stock just in time to witness a solid run from .60-1.09, which marked an intraday rise of 82%

The excellent single-session move came on volume of more than 17X the monthly average, so we’re definitely going to want to keep an eye on it as we kick off this holiday-shortened week.

After first alerting NDEV on December 12th, we’ve borne witness to a really nice run that has essentially lasted the entire time since then.

We observed a low of .30 in the stock on that first day, and it didn’t fall below that mark once in these ten ensuing sessions. What it has done, is gradually raise the bar, until it cracked through the dollar barrier to set a new high of 1.05 on Friday. That qualifies as a two-week swing amounting to 250%

To wrap up this lengthy review of all the recent winners we’ve been tracking, we want to make a quick mention of PZE, which we slated as a bottom-watch play at the end of last month.

We urged readers to monitor the stock closely in the days that followed, feeling strongly that a rebound was in order, and the month of December has really validated that notion convincingly. From the low we witnessed the day after our alert at 4.66, PZE has made its way to a new high of 6.77, a solid 45% swing.

Take a few minutes and have a look at this video update of the state of the cannabis sector, including closer views of a few of the specific plays we’ve been following in the space, and what they’ve been up to in recent weeks:

Interpace Diagnostics Group, Inc. IDXG – We outlined IDXG in Thursday morning’s report, and after witnessing a low of .3619 followed by an excellent 232% pop to 1.20 on that first day, we were optimistic about our chances for seeing more new highs on Friday.

They did come, early on in the session as IDXG ripped to a new high of 1.98, bringing our two-day total observed gain on the stock to a walloping 447%

After initially alerting this stock on Wednesday at a low of .85, MJPI is another multi-dayrunner that we were tracking into the latter half of last week that ended up setting new highs on Friday.

OPHT is setting off our bottom alarms in a big way this morning. The stock is getting absolutely massacred in the premarket in the wake of a poor clinical data release today. The stock is falling to record lows, which is always something that causes us to take note.

Whenever a knee-jerk reaction to any news sends a stock barreling down to its lowest prices ever, you can be all but certain that at some point in the near future, there’s going to be a substantial rebound. With that comes bounceplay opportunities- a chance to properly time the eventual recovery for what could be significant gains. That’s why we’re placing OPHT on intensive bottom watch in coming sessions.