Skip to content
Petroleo Brasiliero S.A. (Petrobras) PBR
–
Our regular readers are already extremely familiar with PBR, as it has been a topic of heavy discussion since first introducing it on Mar. 21st.  At the time, the stock was just coming off of its all-time low (03/17 @ 10.20), and following our initial mention, was trading at 11.25.

The chart we included in that report showed the gap that is currently being filled, now that the stock has broken into the 14.40’s in premarket trading. That leaves a clear path for this stock to break over $15 as it continues to fill the gap.

We were particularly interested in the May $12 Calls from the very start, which were at .31 at the time, and are now approaching 3.00 just as we suggested they might.

Given the current conditions, we may be looking at rolling our strike price up to the $14.50 Calls for further short-term opportunities.

All in all, PBR has behaved very predictably in its recovery thus far, providing us with chances to profit at every turn. Even where the stock is concerned, a position taken at our observed low of 11.25 on March 21st, is worth roughly 25-30% more at this morning’s premarket highs in the 14.40’s, and we expect that figure to grow.

PBR has certainly shown us the value of a good bottom-play, and we have a couple of other candidates that fit that bill to add to the radar today:

As you can see from the following snapshot of the NEWL chart, this stock has been on a fairly steady decline since early this year. As it is gapping up in premarket trading this morning, there is a chance that the bounce could be taking place right here, so we’ll want to watch carefully. At present, NEWL is heavily oversold. 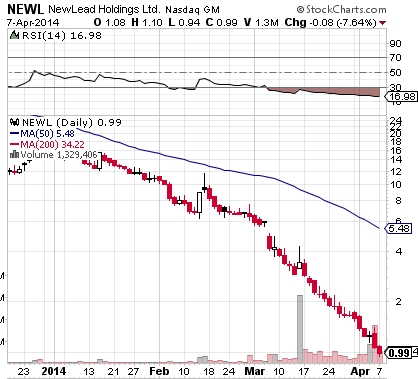 FRMC is coming off of its own recent lows, and has made higher lows over the past three sessions. While it is not gapping up early on today like NEWL, we’ll still want to keep an eye peeled, as a return to recent levels for this play would mean significant gains from here. 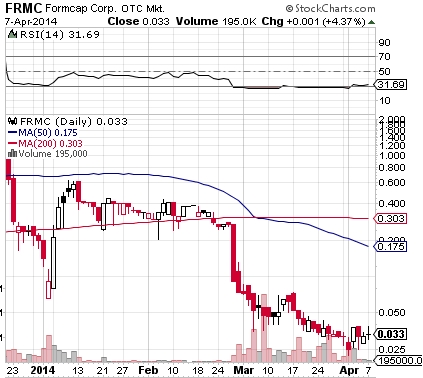