In yesterday’s report we talked about our extended watchlist selection of TGGI on Monday morning, after  the stock ran 67% from .003 to .005. We also noted the trend that it was establishing seemed to suggest the possibility of further advances.

Our hunch proved accurate in no time flat, as TGGI once again broke out to new highs just as we suspected it may. The stock traded in a daily range from .0038 to .0093, which represented an intraday move of 145% and pushed our two-session observed upswing to 210% The stock has been trading heavy volume and with the momentous pattern we’ve seen thus far we’ll certainly continue to keep watch.

As we’ve pointed out on the chart below, we’re going to want to see its previous resistance point at .0053 hold as support on any forthcoming pullbacks in order for us to remain interested in TGGI. 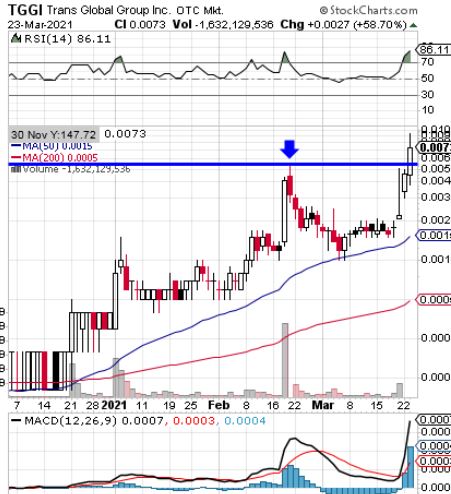 Our lone fresh options idea in yesterday’s premarket report was the BLFS Weekly $40-45 Calls. Despite being our sole point of focus in the options arena for the day, we still hit a bullseye.

The stock ran hard to the $48 level, which facilitated the following solid intraday gains in our designated targets:

With a relatively light earnings calendar yesterday morning, we turned to some daily calls for the SPY in order to offer up some type of fresh options idea to kick off the week. We tagged the SPY 03/22 $389-390 Calls
and it was a good thing that we did, because they exploded for possible multibag gains.

It appears we will have much m,ore to choose from in terms of earnings plays today, but when the selection is slim like yesterday, we tend to turn to the SPY, which can usually be played for quick strike gains no matter the activity as long as the volatility is there.

Here were the excellent single-session moves recorded by our designated SPY targets yesterday:

As we often like to remind our readers, it’s best not to gloss over our daily Extended Watchlists included in our reports because these lists often contain hidden OTC gems on the brink of making moves.

Such was the case with TGGI yesterday morning. Subsequent to our alert on the stock, it ran 67% from a daily low of .003 up to .005. It has registered higher lows and higher highs for each of the past three sessions, so we’ll be open to the possibility of seeing more positive activity unfold as the week progresses.

We initially tagged SAGD on June 21st, signaling our interest in tracking the stock as it was trading as low as .0135. We saw a nice 170% move to .0364 in a matter of week, something we mentioned on Friday when we recapped the stock’s impressive move.

Friday’s session itself brought another opportunity in SAGD in the form of a dip-and-rip scenario. The stock traded for as little as .0255 before rattling off a new high of .0378. It marked an intraday swing of 48% and as measured from our initially observed lows, the new high marked an overall increase of 180% in just over a week.

We’ll be continuing to track the company’s efforts to effect a name and direction change, as it attempts to enter the cannabis space.

On Friday morning, we took a crack at the SPY by signaling some options as the markets looked ready for a solid session. We highlighted the SPY Weekly $270-272 Calls, and the moves exhibited by those contracts were respectable and worthy of mention.

The total possible intraday gains were as follows:

We also would like to quickly make mention of URSL, a penny play we took notice of this morning after a recent run of extreme volatility. The stock has come back down to a relative bottom after a recent incredible run from less than fifty cents to more than 5.50/share. On friday the stock fell back off of a cliff down to the 1.50 area.

With these types of swings occurring in the past handful of sessions, we’re interested in tracking the stock’s activity as we kick off this holiday-shortened week.