Skip to content
Atossa Genetics, Inc.  ATOS
–
We tacked ATOS onto our extended watchlist yesterday morning, noting that the stock was in the midst of a “Huge gap down” and that we were “watching for a potential bounce”. Indeed that was the case, as the stock touched a low of 2.54 before a reversal carried it as high 3.18, a 25% intraday gain. As usual, when we see big gap-downs, we are looking out for quick-strike opportunities that allow us to make a rapid profit and a timely exit.We have uncovered a few other stocks fitting that profile that we will be monitoring for similar activity today:

Cell Therapeutics, Inc. CTIC
Another play from yesterday’s extended watchlist, CTIC opened at its low of day, and rumbled upward for a 23% move, closing at the high of day on nearly 12X its 3mo. average volume. In doing so, it managed to break a previous swing high at 1.80, a level we’d like to see hold as support moving forward.

We prepared the the following video chart on CTIC:

With the kind of momentum CTIC built up over the course of the day yesterday, this is one play that will be near the top of our watchlists in the near future. The catalyst here seems to be an agreement announced yesterday between the company and the FDA as outlined in the press release below.

SEATTLE, Oct. 7, 2013 /PRNewswire via COMTEX/ — Cell Therapeutics, Inc. (CTI) (NASDAQ and MTA: CTIC) today announced that the company reached agreement with the U.S. Food and Drug Administration (FDA) on a Special Protocol Assessment (SPA) for the planned pivotal Phase 3 clinical trial, known as the PERSIST-2 trial, evaluating pacritinib compared to best available therapy, including approved JAK2 inhibitors such as ruxolitinib, in patients with myelofibrosis whose platelet counts are <100,000/uL. The SPA is a written agreement between CTI and the FDA regarding the design, endpoints and planned statistical analysis approach of the trial to be used in support of a potential New Drug Application (NDA) submission. The PERSIST-2 trial is the second of two planned Phase 3 clinical trials in patients with myelofibrosis. CTI expects to initiate the PERSIST-2 clinical trial in the fourth quarter of 2013. >>> FULL STORY

APP is another stock we have tracked for an extended period of time. We have been watching this one to sniff out a bottom for the past few months, and wanted to re-enter it into the conversation today, as that point may be drawing near. A quick peek at the chart below clearly shows just that: 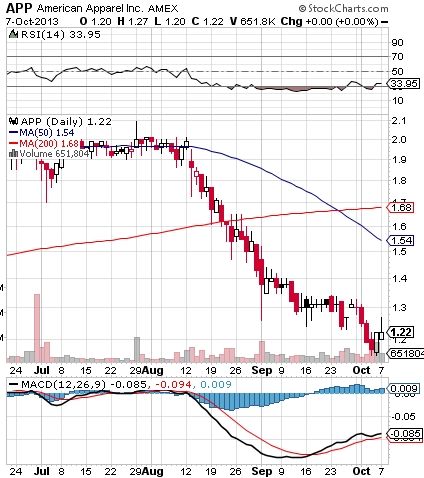