If any of our readers had ever been in any doubt as to why we occasionally try to “shoot the moon” with a risky options idea containing weekly expiration contracts on a Friday, then this past Friday’s session answered their questions for good. We try to shoot the moon, because occasionally you can actually hit it! That was certainly the case with the SPY Weekly $238-50-239.50 Calls that we highlighted in Friday morning’s premarket report.

We stated our reasoning behind the idea as having noticed a “promising jobs numbers release, and what seems like it could be a bullish day for the markets as a whole.”  It really worked out exactly as we hoped, and because the SPY can be traded 15 minutes into post-market hours we got an extra boost to the monster moves we saw, which were as follows:

As you can see, those gain opportunities ranged from really good, to ridiculously good, to full on eye-popping! Cheers to anyone who was along for the ride!

We’ve taken notice of what could be a prime rebound opportunity in UNXL. As you can see plainly on the chart below, the stock bottomed out at the end of last month, and has thus far been building a higher base of support in the month of May.

We’re eager to track this play to see if the trend will continue because if you’ll notice two of our favorite technical indicators on this chart, the RSI and the MACD, both are exhibiting an extremely bullish look at the moment. We’re going to place UNXL on intensive watch, because the party could just be getting started. 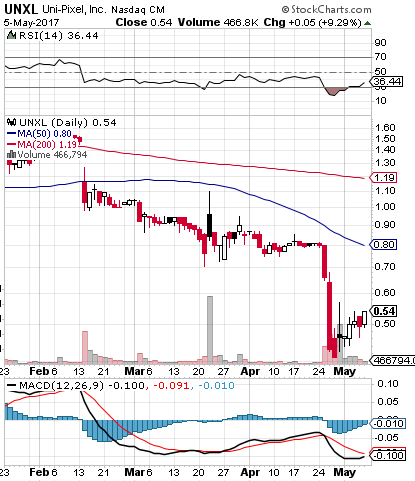 Extra Note: For an added bottom-bounce possibility, we’ll also have California Resources Corp. CRC on our radar, as it just underwent a bullish reversal on Friday, and maintained more than half of its daily gains.

On Friday morning, we were giving our readers an update on the stellar performance of FNHI since we’d first called it back on the 8th. subsequent to which time, the stock was trading at a low of .0061.

Not only did FNHI follow it up with a solid intraday pop, but also extended our total observed range in just over three weeks by a significant margin.

The stock also closed with strength at .0421, holding most of its daily advance, so we’ll be watching it this morning as we prepare to kick off a new trading week.

Speaking of big movers, our tag of CNXS in Friday’s report came just in the nick of time for us to catch a fantastic intraday performance.

That performance marked the third straight session of higher highs and higher lows, so we’re definitely going to be on the lookout for a possible continuation of that trend. Ideally, we’d like to see CNXS hold support at or above Thursday’s swing high of .0092 on any pullbacks.

We also need to bring readers up to speed on the excellent  post-earnings options idea we formulated on Friday for Foot Locker, the FL 03/17 $70-75 Calls.

Those contracts provided daytraders with some cherry opportunities for quick gains with FL’s bullish intraday run from 70.37 to 75.37. The potential profits were as follows:

Prior to last week, the all time high for Bitcoin was $1160, last week that high was broken, and has been making higher highs since.

Winklevoss Bitcoin Trust ETF (Pending:COIN) is subject to approval. Essentially, if the SEC raises no issues by the end of the comment period, the ETF can move forward unhindered. It has caused an increased interest in the space, and as a result, we’ve got our eyes on stocks like the above-mentioned CNXS, along with others like BTSC and GAHC

We’ve been hot on GIGL’s trail since tagging it in Friday’s premarket report, after catching it come off of a bottom. As of the end of that session, we’d witnessed a move of more than 350% from our observed low of .0053, to a high of .024, which occurred on record volume.

Yesterday we reminded our members to continue to keep tabs on the stock, and heeding that suggestion would have extended gain opportunities significantly with the daily performance that followed. GIGL managed to achieve a new high, trading up 140% intraday from .02 to .048. That new high mark represented a two-session swing of 806%

With the stock closing strongly at .035, we will of course be continuing to monitor its activity as we progress through the week.

We also tagged ACNV in yesterday’s morning report, and were pleased with the magnitude of the possible gains that were available there. The stock traded in a range from .008 and managed to hit .015.

That was the second subpenny play in as many days to crack the penny barrier on our watch (GIGL being the other), and it was good for intraday gains of up to 88% A strong close on healthy volume warrants further tracking in this instance as well.

On the 16th of last month, we formulated an extended-term options idea for LLY, and this morning, we’d like to take a second to update our readers on the level of gains that call has attained in recent weeks.

We’ve got one last update this morning for MYHI. Last Wednesday, we tagged this stock, along with a varied group of several legal and medical marijuana plays, and just wanted to circle back to go over the fact that it has followed our expectations to the letter.

After the huge initial move we witnessed from .09-.239 (+166%) that first day, we followed up with an added caution, explicitly stating that “we expect a consolidation that should lead to a dip-and-rip pattern”.

That is exactly what has come to pass, as MYHI consolidated back to a low of .0909, before launching back to .175 yesterday. The move afforded us a chance to realize further gains to the tune of 93% on the rebound.

Along with MYHI, we’ll continue to watch several cannabis stocks, which comprise the vast majority of today’s extended watchlist.