MXSG was the first of a pair of extended watchlist plays from yesterday’s morning report to produce an appreciable intraday move that could’ve been used for healthy single-session gains.

From its opening price of .045 the stock spent the entire morning on a steady uptrend that carried it to a high of .0699 shortly after 12pm. That was good for a daily profit of up to 55%  We next observed a dip-and-rip pattern in afternoon trading wherein the stock came down to find support at .0481 before launching back to the closing PPS of .0615; an added swing of 28%

Those moves came on more than quadruple the 30-day average trading volume and with a strong close, we’ll be sure to leave MXSG on our track-list in coming sessions.

We actually called this play back on February 5th at which time the stock was trading at  .0016. Yesterday’s high represented an unreal 3744% increase in roughly three-and-a-half months over that low!

The other significant runner that showed itself yesterday was ABRW. This was one that was also good for a quick rip right from the opening bell.

We witnessed an immediate spike from .98 up to 1.51, which represents a rip of 54% While the stock did trade mostly sideways for the remainder of the session, it managed to close at 1.35, maintaining well over half of its daily advance. That qualifies this play for continued observation as well.

For the first time this week, we’re going to submit a couple of fresh plays on the options trading front.

SPDR S&P 500 ETF Trust (SPY) – The SPY has been a go-to for us when we want a chance to leverage overall market sentiment to our advantage. With strong performance from the markets as a whole, as well as cracking its 50DMA yesterday for the first time in several sessions, our highlighted range here is going to be SPY Weekly $208-210 Calls.

Apple, Inc. AAPL – It has been quite some time since we formulated any options ideas for AAPL, but it is one that has produced winners for us on a multitude of occasions in the past. The stock has been rebounding and showing strength over the past couple of sessions. Couple that with, as we just said, an overall bullishness in the general tone of the markets at large, and it makes AAPL an attractive target for us today, and into the near future. We’re going to zero in on AAPL Weekly $98-99 Calls for possible quick-strike opportunities, as well as AAPL 07/17 $101 Calls for a more of an extended-term idea.

After signaling BBEP in Thursday morning’s premarket report as a “Bankrupt Bottom-Bouncer” we witnessed a low of .055 followed by a 100% jump to a high of .11 on Friday.

As we were congratulating those who took advantage of the move in yesterday’s premarket report, we also mentioned that we’d remain interested in BBEP as long as it managed to maintain support above the .06-.065 range on any pullbacks. The stock achieved that feat right from the outset as it gapped up, opened at .078, and kept running.

We ultimately witnessed a trading range from that morning low of .078 up to a new high of .132. That represented an intraday upswing of 69% and a three-session swing of 140% over our observed low of .055 on Thurdsday.

We’ll continue to stay on the stock’s trail, watching for continued registering of higher lows and higher highs.

When we began re-alerting and closely tracking an old favorite in TRTC toward the end of March, it was just coming off of a nice run-up that had followed a long period of mostly sideways trading.  Subsequent to that point we ended up clocking this play over an impressive range as it ran from a low of .2162-.7455; a 245% upswing in a period of just under three weeks.

Following that mega-move, the stock began to see a good deal of consolidation over the next few weeks. That came to an abrupt halt yesterday as the stock bounced off of a higher swing low at .2698 and managed a nice 30% increase. Now trading in the low-to-mid .30’s, we’re going to watch intently in coming sessions for the possibility of a protracted rebound.

We took an interest in LC yesterday, alerting the stock as a potential bottom-bouncer in our morning report. It had been coming off of being egregiously oversold, and setting higher lows off of its 52-week lows for the preceding few sessions.

We ended up seeing a modest intraday run of 9% from 4.19-4.58, but most importantly, the stock registered higher lows and higher highs over the prior session, and we’ll keep tracking it for a continuation of that pattern We’ve pointed out on the chart below, a significant one-dollar gap that could be filled if the stock maintains the present trend, as well as an impending bullish cross on the MACD. 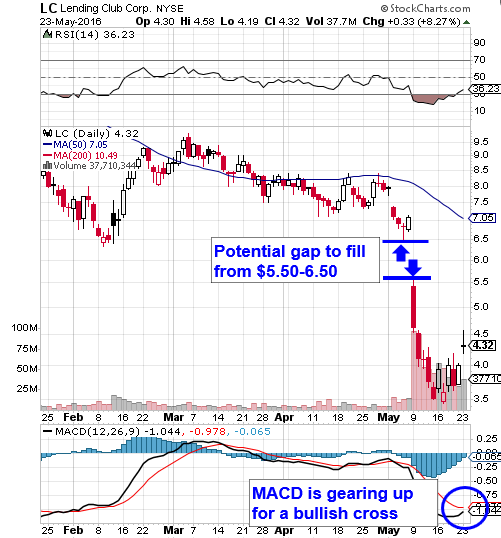