Plug Power, Inc. PLUG
–
We had a feeling that PLUG was going to continue its run yesterday, as stated in our daily report, and once again our instincts served us well. The momentum built up in this stock on Wednesday as it made a 23% move to close out the session on more than 6x the 3mo. average volume was impossible to ignore.

After opening at the key resistance point we outlined (1.45) PLUG briefly dipped to 1.43 and then barreled upward as it touched a high of 1.96, an intraday gain of 37% on roughly 14x the average volume. The momentum continued to build in PLUG and we continued to follow along closely. Remember, our coverage of this play goes back a long way, since the stock was trading in the .11-range.

This morning, the stock is gapping up above 2.00. The current pre-market high of 2.19 represents a gain of 1804% from the low following our first ever PLUG alert back on Feb 28th. The gain from our recent re-alert at a low of 1.04, at this morning’s high, stands at 111%

PLUG has certainly surpassed any expectations we had for it, and as you can see on the chart below, it appears currently overbought, which means the time to take profits off of the table is fast approaching. For newcomers, we believe the best action would be to patiently await a dip, and subsequent rebound, as has occurred several times this year. 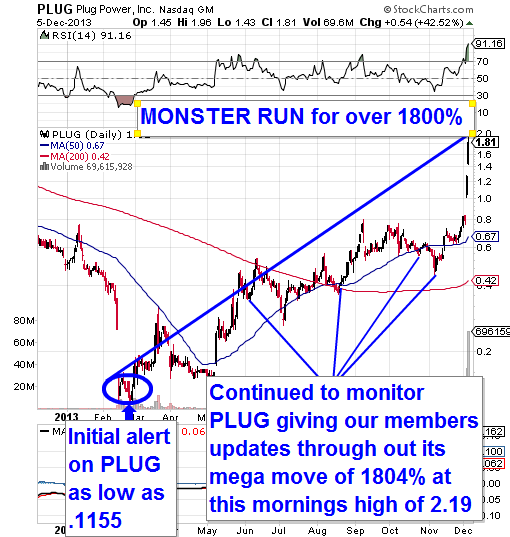 BLDP appeared on our extended watchlist on Wednesday, at which time the stock was trading at a low of 1.34. This morning, we are witnessing a gap-up on a PR that hit the wire post-market yesterday, with trades currently going off in the 1.80-range. We’ll want to keep an eye on the activity here as we close out the week, so we’re reserving a spot on our tickers for BLDP.

MACK is another play we’ve been tracking recently, mentioning it for the first time on November 8th, when it was trading as low as 2.40. Like the previous play, MACK is gapping up this morning to the tune of more than 100% with shares changing hands for more than 4.80.