We highlighted JDST in Friday’s morning report, and on that day we observed a low of 11.40 following a gap-up. Bolstered jobs numbers and the continued strength of the dollar combined with a lag in gold prices fueled the beginning of what has turned out to be a solid run for this ETF.

Yesterday, it continued its uptrend, breaking through the 200DMA (14.46) and reaching as high as 14.50. That translates to a respectable two-session increase of 27%

We’ll be keeping a close eye on the spot price of gold which is currently holding support off of three-month lows, and urge caution moving forward. A significant rebound would effectively spell the end of JDST’s current momentum.

We’re also taking notice of VCOR this morning on the heels of a premarket PR alluding to a massive 40% reduction of its authorized common stock. VCOR has recently been rebounding off of its lowest price in more than four months, and it’s possible we’ll see a continuation of that momentum as a result of today’s announcement.

We’re catching QIHU in the midst of a morning gap-up today following the company’s post-market earnings beat yesterday. It’s leading us to formulate a couple of options-trading ideas that we’ll share with you now, along with a snapshot of the current chart to help illustrate the opportunities it presents.

The stock itself is coming off of a recently established 52-week low, which in and of itself is a phenomena for which we’re constantly on the lookout. 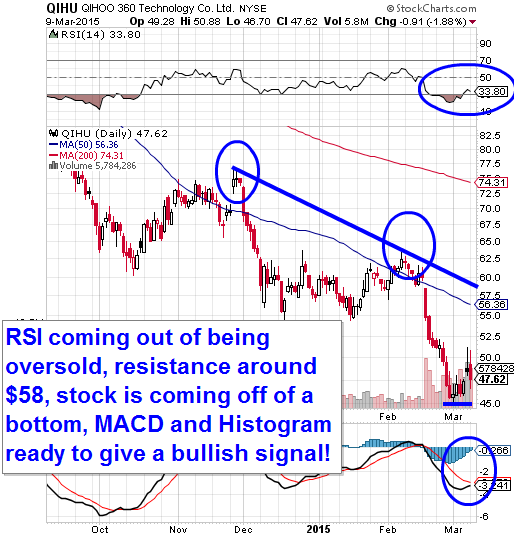 We really couldn’t have been more spot-on in our pre-market assessment of PIHN yesterday. The stock behaved precisely as we suggested it might; running hard in the morning, followed by a pullback as profit-takers exited, and a subsequent bounce.

Moving forward, we’d like to see PIHN hold support at .015 in order for us to remain interested. It will be interesting to see how another PR out this morning will factor into the equation:

We first mentioned MLCG on March 5th, and would shortly thereafter witness a low of .04. Since trading at that level, the stock has provided us with sizable chances for profit.

It then followed up its appearance in yesterday’s report with quite a session as well, going on a 53% romp from .0653 to .0999. That high also represented an overall increase of 150% from the four-cent low we observed just six sessions ago.

MLCG will remain on our watchlist on the heels of yet another PR update released this morning, announcing that the company has found the first distributor for their SuperStar brand cannabis-vaporizing “pens”:

ML Capital Group, Inc. (“MLCG” or the “Company”) recently announced the upcoming publication of its SuperStar MMJ Recipes book, as well as integrating access to the book through its SuperStar MMJ Dispensaries smartphone application, both of which are expected to be launched in April 2014.

Today, the Company is excited to announce that it has signed its first major distributor to market and sell the SuperStar Vapor Pen. >> FULL PR

We are still waiting to hear more about the planned line of premium vodka that the company has teamed up with basketball star Dennis Rodman to market. In the meantime we intend to continue taking advantage of any further opportunities presented by this volatile stock.

Since a golden cross on the CRWE chart back in May, the stock has been performing quite well. After appearing in yesterday’s extended watchlist, it provided us with a chance to make make 20% gain intraday.

Solar stocks appear to be gearing up for an uptrend in what is often a cyclical trading pattern. For that reason, we’ve been keeping an ongoing watchlist of solar plays. In case you missed the previous report containing that watchlist you can find it here.  In addition to that solar list, we are also adding HSOL and ASTI to our radar.

Appearing in the extended watchlist of that same solar report was Green Energy Renewable Solution, Inc. EWRL. Ever since, the chart has stair-stepped its way up, coming from a low of .0095 to hit a high of .024 yesterday. That marks a move of 153% That company will soon undergo a name and symbol change as per a recent announcement that it had merged with Cirque Energy II, LLC. The new name will be Cirque Energy, the new symbol has yet to be designated.