As we very often do, we put forth some fresh options trading ideas for our report yesterday morning, and experienced good fortune with those as the session played out. Our ideas for both Dominos Pizza and eBay each panned out quite nicely, giving traders a solid chance at some serious multi-bag profits on the day.

Following its inclusion in our extended watchlist yesterday morning, MTP made a solid intraday run that we wanted to recap this morning. The stock traded in a range from a low of  2.95 on up to 3.86. That was good for total possible intraday gains of up to 31%

We’ll continue to keep an eye peeled for further gains on MTP, which recently surged to more than $10 just last month. The potential for the kind of extreme volatility we look for is certainly there.

In terms of things we routinely look for in stocks that we set our sights upon, DSW seems to currently have a lot to offer. It’s a stock that has just registered a new annual low, while rapidly approaching heavily oversold territory according to indicators on the chart.

The company also happens to have released its quarterly earnings this morning, the results of which exceeded expectations as DSW recorded its first same-store sales increases since 2015.

With all these things going for it, it seems only logical for us to formulate an options idea to put on our radars and monitor over the next few weeks. We’re going to have our eye on the DSW 09/15 $17.50 & $20 Calls.

We’ve spotted a nice chart setup on ZN as well on our routine morning scan today. We’ve pointed that out on the chart below.

The stock had a really nice run back in June that carried it from the 1.40 area up to $7, and after consolidating off of those highs during the past several weeks, it seems to have found support and begun its next up-cycle.

Hypothetically, a return to the highs it saw earlier in the summer, would mean more than a double-bagger from current pricing. 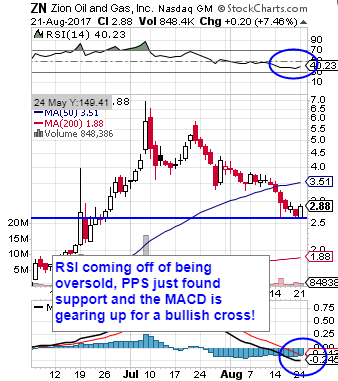