We’ve noticed some abnormal activity coming out of ZSPH yesterday on the heels of supposed talks of a takeover by Actelion,Ltd (ALIOY). The stock had already been in a general uptrend since the end of August, and really took off on confirmation from the company that it had indeed entered into talks to possibly be taken over in what it referred to as a ‘strategic transaction’.

When stocks surge so rapidly on non-material news, there’s always a good chance for seeing a classic dip-and-style style formation on the chart, so that’s what we’re going to be on the lookout for in this case.

To help us leverage the activity in ZSPH to our greatest advantage, we’ll formulate a corresponding options idea to monitor for intraday strike opportunities. Out specific target range will be ZSPH Weekly $75-85 Calls. We had monstrous success with some of our other recent options ideas, we’ll look to ZSPH to help us finish out this holiday-shortened week on a high note.

The NETE chart has caught our eye this morning as one with the potential to produce a promising recovery play. The stock is trading at relative lows, having just logged it’s annual bottom last month. There is also a clear-cut example of a double-bottom formation on this chart, so we’re going to tag this stock for extended observation.

We’ve been tracking GBSN in hopes of catching its eventual bottom, and as of today we’re still waiting. We don’t want to let it slip off of our radars, however, because the chance for a hefty rebound when solid support is ultimately established is very high. The chart has recently reached egregiously-oversold territory as we’ve pointed out below. We’ll look for it to begin building higher lows and kick off its recovery. 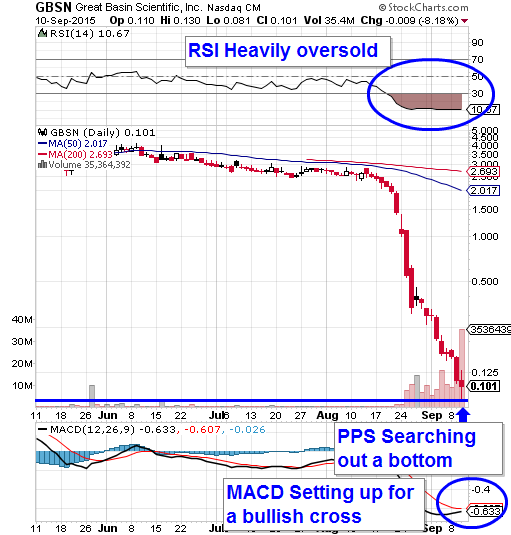 We also want to formulate a quick options idea for AMZN. The stock is trading way below analyst estimates, so we’re going to be tracking a little bit of a longer-term idea. We want to keep a close watch over the 10/16 $550 Calls.(Last traded @ 10.17)

In order for us to remain interested in those contracts, we’ll want to see AMZN maintain support no lower than 499.74 (50DMA). In the event that it fails to hold above that threshold, we’d need to roll our strike price down to the $525’s of the same expiration date.

We’ve also identified a few bullish characteristics on the GRLT chart. This super-subpenny play has the look of a stock that could possibly break out. If it can maintain its PPS at a level no lower than the 50DMA of .0004, we’ll keep this one on watch for potential move in forthcoming sessions. 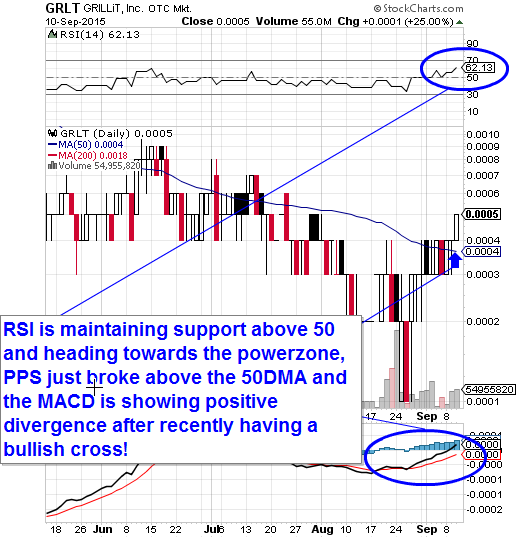