We mentioned the possibility of further gains for the calls we signaled in the Under Armour options chain on Tuesday, the UAA Weekly $15.50-16.50 Calls.

The markets pulled a head-fake, and ended up going green, which helped allow the stock to make to more than $18. That created huge opportunities in our highlighted plays, which went quickly from double-baggers on Tuesday, to a triple, a quad, and even an octuple-bagger!

We are looking at PYDS as a bottom-bouncer with just the kind of chart setup we like. The stock spent nearly all of January and the beginning of February under heavy consolidation down to its lowest PPS since October. In the last couple of weeks it has shown signs of a solid turnaround.

As you can see below, the RSI is coming off of being oversold and presently cruising toward the 50-line,  the MACD is in the midst of a bullish cross, and yesterday saw the testing of the 200DMA. PYDS also has a recent history of rapid runs up the chart, also visible on the included snapshot, so we’ll be keeping a close eye on it in the coming days. 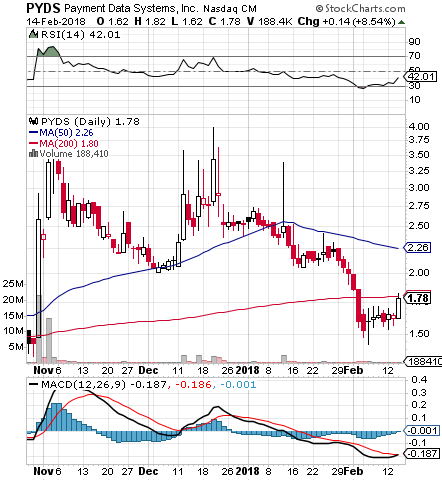