SPHS was the first mention from yesterday’s morning report to grab our attention with an early surge that provided the chance at a rapid, substantial gain. From the low-of-day at 1.02, the stock made a big move to 1.64; an increase of 60% inside of the first half-hour of the session. The bulk of the day’s volume, which came in at more than 18X the three-month average, traded in that short time-span as well.

In addition to the heavy volume, making its biggest moves early in the trading day seems to be an established pattern with SPHS, so we’ll have an eye peeled as the session commences today.

The other standout from yesterday’s report was OPXA, which spiked on word of coverage initiation by large investment banking and research firm, Maxim Group. (>>View PR)

From its daily low of .43, the stock stair-stepped its way up throughout the session and eventually hit a high of .54; an intraday gain of 26% As it appears to gapping up in the premarket and has already touched .58, the total increase we’ve seen gets pushed to 35% We’ll be interested to follow the impending activity as well as check out the CEO’s presentation which we detail below.

Per a news release from last week, “Neil K. Warma, President and Chief Executive Officer, will present at the 2015 Marcum Microcap Conference on Thursday, May 28, 2015, at 11:30 a.m. EDT in the Plymouth Room. The conference will be held at the Grand Hyatt New York Hotel in New York, NY. A live webcast of the company presentation can be accessed here, or via the Investor Relations section of the Company’s website at www.opexatherapeutics.com.

PPCH is a stock that we began tracking in the second week of March, and over the period of several weeks since that time the stock has made some truly epic moves. Subsequent to our tag of PPCH on March 18th, we observed a low of .0116, followed by an impressive run up to an even dime. That 762% mega-run was followed by a tapering back to a low of .021.

Yesterday the stock soared almost all the way back to its previous high, touching .094, which marks another swing of 348% that we;ve seen from this incredible mover. If the stock can breach that previous swing-high, it’ll be off to the races, so we’ll definitely keep PPCH an item of interest moving forward. 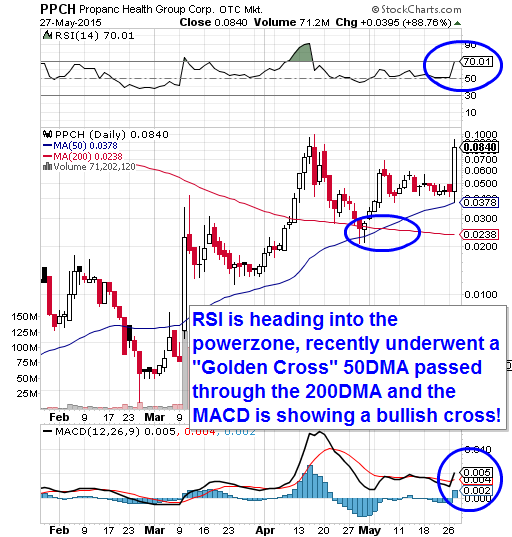