ICLD stood out as a solid mover from yesterday’s premarket report. From a morning low of 3.01, the stock made an authoritative move on up to a high of 4.30 just prior to the closing bell.  That represents an increase of 43% on heavy volume to the tune of nearly 38X the three-month average. That figure has been extended to 46%  in the premarket today with the stock touching a high of 4.40 so far.

We’ll want to monitor ICLD for a sustained run; if it can manage higher highs and higher lows today, it would mark the third straight session. The boost it received yesterday was due, in part, to the announcement of a new product launch, the link to which we’ve included below.

XGTI was another stock from yesterday’s report that made a significant move on the day. It saw a an early low of .40, and would go on to run toward the end of the session, hitting a high of .5474. That worked out to an intraday move of 37%

The stock managed to hold .54 into the close, and the performance came on volume exceeding the monthly average by more than 6X. Anytime we observe action of this kind, we want to be on the lookout for continued activity in subsequent sessions. Already in early trading today we’re seeing the beginnings of a dip-and-rip pattern. We’ll keep our eyes peeled for added chances to take advantage of this play.

Toward the end of last week, OSLH found a bottom after pulling back off of that historic move, and began to rebound from the .0075-mark, and has definitely won back our attention. Yesterday’s session carried OSLH as high as .0144, a 92% swing. We’ll watch this play for the possibility of a protracted rebound off of Friday’s low.

We pulled up PTBI on a routine scan today, and it’s a stock that has been invested in by activist investor George Soros, as we’ve learned in the PR out this morning.. Occasionally, we like to watch stocks that are in the portfolios of high-profile investors. Just last month we followed VLTC over a huge run that was fueled by the involvement of Carl Icahn.

The stock is already up significantly in early trading, and there’s a chance we could see a major gap on the chart up to the 5.50 area filled, so we’ll have this one on our radar for just such an event. We’ve pointed this out below; if PTBI can gain support at or above the 4.40-mark, we like its chances of making a nice run. 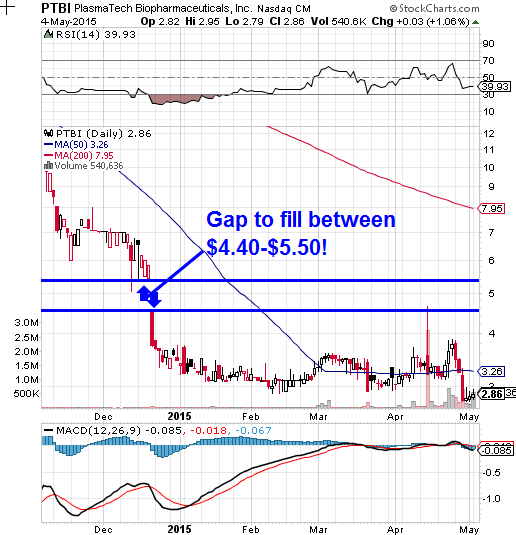