Despite already having provided us with multi-bag gain chances in previous sessions, the  TWX Weekly $77-79 Calls that we signaled on Wednesday, once again made stellar runs on Friday. The figures even surpassed the prior moves we’d witnessed.

The single-session profits that were available were as follows:

TEUFF is another play that we brought into the mix in our premarket report on Wednesday, and the stock responded with three straight sessions of setting new highs.

Friday saw the stock trading in a range from a low of .032 to the new high of .0438, representing an intraday rip of 37% From our observed low of TEUFF at .018 on Wednesday following our initial alert, that works out to a three-session upswing of 143%

That makes the sixth straight session of higher highs and higher lows for TEUFF, and as we stated on Friday morning, we’ll remain interested for as long as that pattern is maintained.

We’ve tracked TRTC quite a bit over the years as one of our favorite plays in the cannabis sector. Having appeared in our articles over 30 times since 2012, TRTC started appearing in our reports again this year in January, April and May as we tracked it over a monumental 4-month-long run from .115 (01/13) to nearly .75; a mind numbing move approaching 550%

More recently, on August 1st we re-alerted TRTC, and  in the past week its begun another nice move up from a low of .389 to Friday’s high of .4875; a notable 25% move. If TRTC can hold support off of the 50DMA (.34) on any pullbacks, it will continue to hold our interest going forward.

We’re always on the lookout to take advantage of a stock that’s seen a rapid decrease in PPS, and QVCA fits that bill perfectly. On the heels of a mixed earnings release, as well as some shaky investor sentiment regarding the retail space, QVCA fell off of a cliff on Friday, setting a new annual low.

As a result, we’re going to track a couple of sets of longer-term ideas to leverage an eventual recovery for the stock to our advantage. We’ll be monitoring a ranges of contracts with differing expiration dates to give ourselves the nbest chance to seek out a winner. Our targets are going to be the QVCA 09/16 and 10/21 $21-23 Calls.

We’ve been quite familiar with ASTI in the past, and circled back around to it yesterday morning, in time to catch what was ultimately one heck of a solid session.

We had noticed it recently producing some bottom-bounce action, along with a huge increase in volume and they proved to be huge indicators of a continued surge. The stock traded in a range from .051-.0779, for a healthy 53% jump, and maintained well over half of that gain into the close at .074.

We’ll definitely want to see ASTI take a run at its previous swing highs of .085 and .119, followed by the 50DMA of .13, as pointed out in the chart snapshot here: 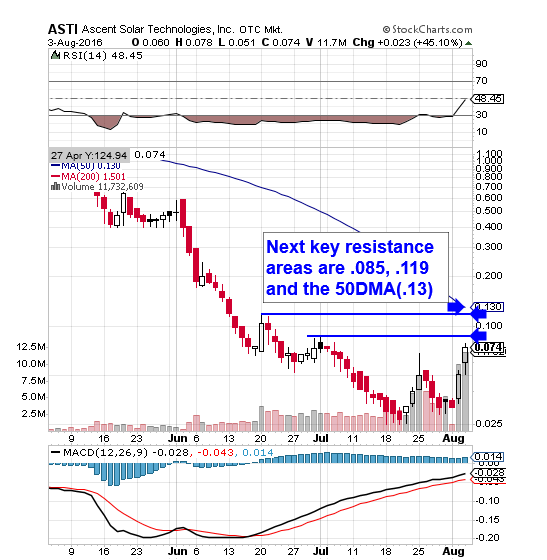 We brought an options trading idea to the table yesterday morning in the wake of an earnings beat for Time Warner, the TWX Weekly $77-79 Calls, and every set of contracts in the range performed really well, with each one yielding a multi-bag gain opportunity on the day.

With news hitting in the post-market yesterday that TWX will be taking up a 10% stake in Hulu, it will be interesting to see how the activity unfolds from here.

Another inclusion in yesterday’s premarket report was TEUFF, which, similar to ASTI, was in the midst of a spike in upward momentum off of a recent bottom. We were banking on seeing some of that carry over into yesterday’s session, and that’s just what happened.

TEUFF traded up from a low of .018 and hit .0276; another 53% intraday gainer for what was a very productive day all around.

The standout runner from yesterday morning’s premarket report ended up being AGTK. We noticed it had been ramping up in PPS over the preceding two sessions, and figured it was worth tracking. We were right on in our assumption, as the stock traded in a respectable daily range, running into the close with strength.

AGTK saw an early low of .00168 before running to a high of .0025, representing a single-session spike of 49% The move came on stronger-than-average volume, and marked the third straight session of higher highs and higher lows.

We’ll remain interested in tracking the activity in AGTK provided it can hold support at or above .002; next key areas of resistance are at the 50 and 200DMA’s at .0029 and .0031, respectively.

We’ve got a pair of options chains to watch as well, for the following ideas:

Ford Motor Co. F – Our idea concerning Ford is based more off of technical factors of the current chart. As you can see, there are a number of indicators pointing to the possibility of a forthcoming recovery. We want to select a set of contracts with an extended expiration to give our idea time to manifest; the F 09/16 $12.75 Calls. The stock is searching for a bottom, and we’ll need to wait until just the right moment when it begins to rebound and possibly make a run at filling the gap. 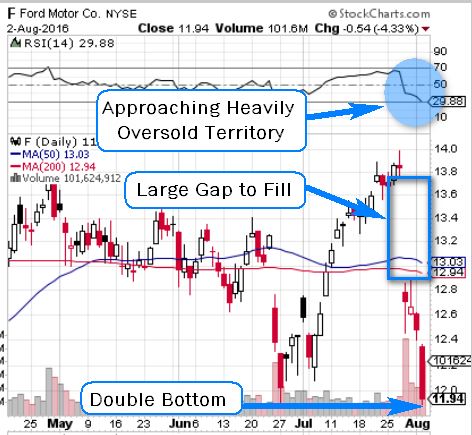 Lastly, we want to put another new play on watch, based purely off of the look of the chart. As you can see, OMEX is in the process of filling a major gap on its chart from this spring, and it just bulled through its 200DMA yesterday. The RSI has also cracked into the power zone, so we’ll definitely be observing the near-term activity on this play. 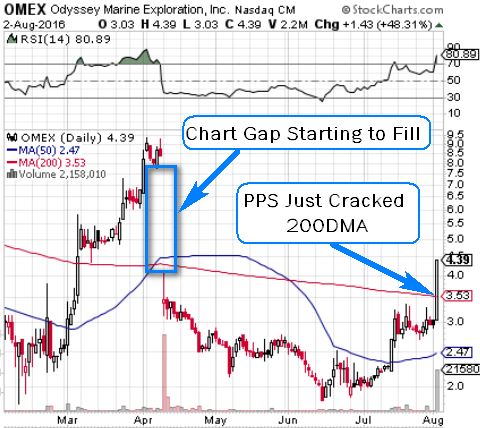