We caught wind of a potential opportunity in MTBC yesterday morning on a routine scan, and we included it in our extended wathclist for the day. We’re glad that we did, because it turned out to be our top performer for the session!

From a low of 1.43 MTBC shot to a high of 2.87 for an early intraday rip of 101% The stock traded massive volume to the tune of fourteen times the monthly average, while holding the vast majority of its daily gain into the close at 2.40. Based on those factors, we’re very interested to continue tracking MTBC over the course of the next few sessions.

While it does appear overbought at the moment, having been in a bullish pattern for a week now, the stock is currently in blue skies, so there’s no telling where this run might end. One thing’s for sure, when it does begin to pull back off of these impressive new highs, we’ll be waiting in the wings for a subsequent dip-and-rip.

Yesterday morning we pointed out that OCN was looking massively oversold after falling off a cliff a couple of weeks ago. We also alluded to the fact that it was gapping up significantly in the premarket.

Our vigilance paid off instantly as the stock quickly turned into the bottom bouncer we had it figured for, running 30% intraday from 2.60 to 3.38 on roughly six times the 30-day average. Even if it just returned to its 200DMA, it would spell further gains of 38% so we’ll continue to keep an eye on OCN.

Speaking of bottom-plays, we’re taking notice of NXTD this morning as the stock is gapping up past its current 50DMA of 1.86 in the premarket.

Prior to today it had already begun to bear the look of a stock that was ripening for a rebound, and we’re going to want to pay close attention to its progress in sessions to come looking for the recording of higher highs and higher lows. 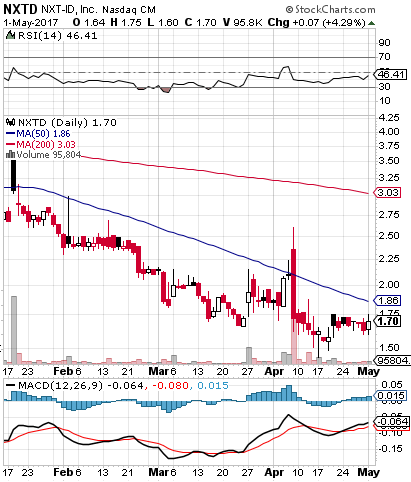