No sooner than we were commenting on CCTC’s fantastic performance in the month of September in yesterday’s morning report, did the stock continue to bull its way to new highs. As is plain to see on the included chart snapshot, it has mostly been one positive session after another.

We had just pointed out the 142% increase CCTC had made from our observed low of .36 to Friday’s high of .87, and the stock managed to impress us again. From a daily low of .851, it cracked through a big psychological barrier at a dollar, and managed a new high of 1.07. It figured in as a 26% intraday run, and extended our total observed increase in just over a couple of weeks to 197%

The chart is now well into overbought territory, so we wouldn’t be surprised to see a bit of a pullback. In order for us to remain interested in CCTC, we’ll need to see it maintain support in the channel between .75-.65, at the lowest. 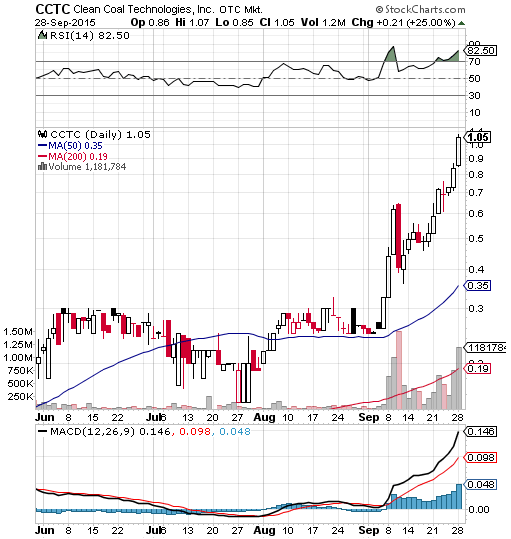 A quick tag search for BLDP on our blog shows our long history with this stock, and we wanted to quickly re-mention it this morning. We most recently tagged it as a bottom-watch play on July 2nd after noticing the stock taking a big backslide. It has been mostly in a downtrend since that time, but we’re going to want to begin watching more intently.

The company inked a major deal to supply 300 buses in Foshan and Yunfu, China, with their fuel cell systems (>>View PR). According to a ‘Zacks’ article posted yesterday, BLDP’s transaction is “Valued at $17 million, and the deal will also bring in potential recurring royalties starting from 2017.”

We’ll continue to keep BLDP on our extended-term recovery watchlist.

Options Ideas For a Market Rebound

After five straight days of down markets, we’re going to be on the lookout for a rebound today. We’re seeing a gap-up here in early trading, so we wanted to venture a couple of options ideas if events play out as we expect.

We’re going to zero in on GoPro, Inc. GPRO and Facebook, Inc. FB for potential opportunities, specifically the GPRO Weekly $31-32.50 Calls, and the FB Weekly $90-91 Calls.