Our NFLX options ideas from Tuesday morning continued to provide us with excellent intraday gains to take advantage of yesterday, despite already logging moves ranging between 54-98%.  Our target range, the NFLX Weekly $117-120 Calls, once again put up fantastic performances, regardless of which strike point was chosen.

Here are the total possible gains for yesterday’s session:

We’ve had a nice two-day run with these contracts and are ready to move on to the next idea, unless we see a dip-and-rip setup on the chart, in which case they would come back into play.
_____

Our other options idea from yesterday also worked out in spades. We noticed that the stock had been absolutely abused on immaterial news the session prior, and took the chance to pounce with  a signal on the stock for a possible bottom play, and both short and mid-term options ideas.

With the stock appearing to gear up for another solid session, those 11/18 $20 Calls could join the rest of the group in making moves for us in upcoming sessions, so we’ll continue to keep a close watch.
______

We’ve got another post-earnings options idea to add into the mix this morning as well with American Express, which beat expectations and raised guidance on profits for the remainder of 2016. Accordingly, we’re going to want to track AXP Weekly $64-65.50 Calls.

Cannabis Science, Inc. CBIS – CBIS continued to push to new highs after our flag of the stock on Tuesday. After running 44% that day from .034 to .0489, we saw another solid round of gains yesterday. The stock traded in a range from .049 to .077, for a 57% intraday run and an overall increase of 126% over Tuesday’s low.

IMD Companies, Inc. ICBU – Also among the marijuana stocks that we’ve slated for observation was this one that was new to our reports yesterday, and put up a pretty good move for our first day of observance.

Being added to the watchlist this morning is PLPL, as a momentum play. The stock has been on the move over the past couple of sessions, having cracked through key resistance points on heavy volume. If it can breach the 200DMA of .045, things could get even more interesting from here.

We’ll remain interested in this play provided it can hold support at or above .03 on any pullbacks.
. 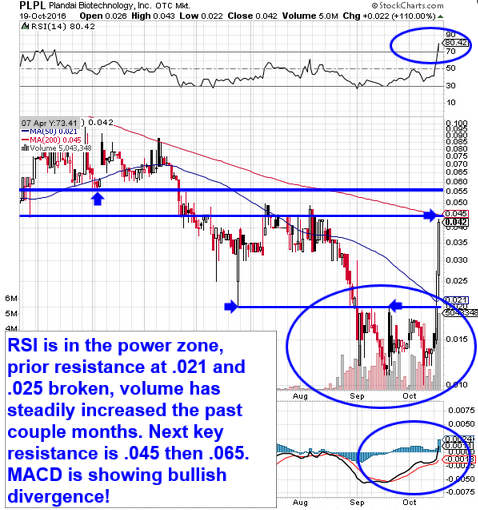 We had just come off of an excellent post-earnings options idea on Hasbro leading into yesterday’s session, and to keep the train rolling, we offered up an another options idea to go along with NFLX’s own earnings beat.

We’ve said it a hundred times and will probably say it a hundred more- quarterly earnings provide a fantastic method of using big board stocks to leverage huge short-term profits out of their options chains, and NFLX is illustrating that point to a tee.

We signaled our interest in the NFLX Weekly $117-120 Calls, and of course, they all made notable moves to the upside on the session:

We cautioned readers in yesterday’s report that the activity on marijuana related stocks has been ramping up, and in lieu of a traditional extended watchlist for the day, we posted a list of over a dozen to keep an eye on, and nearly all of them ended the day in the green.

One of the most solid plays out of the list was CBIS, which ran a healthy 44% from .034 to .0489, and did so on volume exceeding the monthly average roughly seven-fold. After that initial run, the stock pulled back before surging again toward the end of the day, and posting a strong close at .0475.
_____

We’ll look to keep monitoring the situation in not only CBIS, but the marijuana space as a whole. We’re confident enough in the present landscape to assert that the opportunities are most assuredly not going to end here. As we’ve stated multiple times now, recreational legalization in California (the world’s 6th-largest economy) is just weeks away. It figures to reinvigorate investor interest in pot stocks even more than we’ve seen to this point, as well as representing the toppling of a major domino in what we feel will ultimately be a chain-reaction leading to nationwide legalization.

According to the LA Times poll, roughly 60% of California voters plan on voting yes on Prop 64, which would mean that by this time next month, the entire West Coast from Canada to Mexico will be a prohibition-free zone.
_____

Added Note: We also want to add ICBU to our marijuana watchlist; a stock that we haven’t mentioned in the past, on the heels of an interesting PR. (>>View PR)

Speaking of California, BANC stock has fallen off a cliff on immaterial news of a pending fraud investigation. We always look for knee-jerk selloffs like these, and in this case it actually happens to be coinciding with an earnings beat. That’s why we’re interested in signaling both the stock and some options ideas for this one.