Skip to content
Geron Corp. GERN – Recap
It’s all well and good to seek out stocks that are set to make a big jump overnight, but slower growth plays also interest us greatly. GERN is an example of a stock that we tagged near the beginning of last month (02.05) which has performed well over an extended period of several weeks.

Subsequent to our tag of GERN, the stock saw a low of 2.025, and in a series of small, incremental daily gains, it steadily made its way up to a high of 4.47 yesterday, representing an increase of 121%. That’s a very respectable gain in roughly a six week period.

We want to take this opportunity to place WHLR on watch as a potential bottom-play. The stock has been greatly abused over the past several months, falling well below all its moving averages, and reaching egregiously oversold territory. There is also a fairly large gap on chart to the upside, something for which we routinely look.

We’ll keep an eye on WHLR in sessions to come looking for the confirmation of a bounce. It certainly has plenty of room to run when that occurs, so keep a sharp eye out. 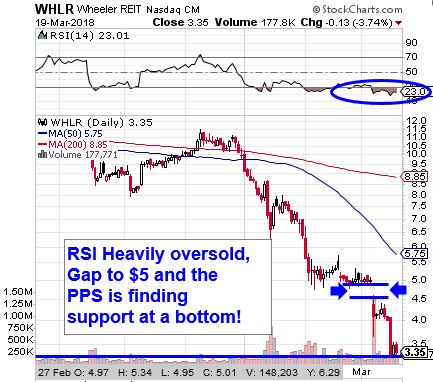