We hope everyone had a pleasant midweek holiday break; we expect a relatively subdued closeout to this short week, but one stock that is hitting our scanners as a high potential bottom play this morning is ANW.

As you can see from the included chart, the stock has been oversold for quite some time now, reaching unsustainable low levels, while a massive gap exists to the upside.

The stock has begun to fill that gap this morning, and we’re interested to see where the spike in activity is going to take ANW. 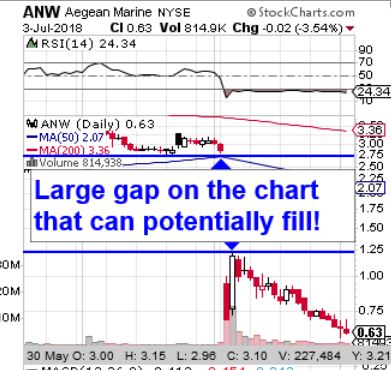 We included QURE in our premarket report on Thursday, after the company’s hemophilia gene therapy treatment was advanced to Phase III testing.

What followed was an enormous influx of volume, and two really solid, bullish sessions, advancing from a low of 11.55 on Thursday to a new high of 19.34 on Friday. That works out to a very respectable two-day swing of 67%

It’s the highest PPS QURE has attained since 2015, and the two sessions come in at numbers 1 and 2 highest volume days of all time, so we’d say our alert was timed with absolute precision.

We included ONVO in Friday morning’s extended watchlist, and it also put up a pretty good performance on the day.

From a low of 1.45, the stock traded as high as 1.80 on fairly heavy volume. We’ll want to see the stock continue to establish higher highs and higher lows as it’s coming off of its bottom.

We’d like to signal a post-earnings options idea for PETS this morning, after the company set new records with its Q2 numbers. It’s gapping up significantly in the premarket, and the volume it traded on Friday leading into the release was the highest all month.  We’re going to put the PETS 11/17 $40-50 Calls on watch moving forward.

We’re looking at a pair of stocks this morning that have broken out, and that we’d like to monitor on the chance that they produce sustained uptrends.

Leading Brands, Inc. LBIX – This was a fairly illiquid stock until just recently, when it broke out of a mundane pattern of low volatility and began a run into blue skies which lasted from Tuesday through Friday. We’ll stay wary of the possibility for course corrections, but a dip-and-rip scenario could definitely come into play here in coming sessions. The volatility has ramped up in a huge way, which is what we always look out for as swing traders.
______

22nd Century Group Inc. XXII – In the case of XXII, the stock has traded in a fairly predictable pattern over the past few months, during which time it has formed a solid upward channel. The company also recently closed a $54M direct offering at 2.65/share. We’ll look for this one to continue to build, keeping an eye on it as we kick off a new trading week.

We also want to signal a couple of options ideas for Disney, which has a pretty nice bottom setup on the chart, trading near its lowest per-share pricing since December.