We dont typically talk about listed securities, but are making an exception this morning for JVA. This stock is at a low after having found a bottom in the eight dollar range, and trading at 10.00 or better for the majority of the summer. At times, much better; it hit a high of nearly 30 dollars!

Have a look at the annotated chart we prepared which points out some of the highlights. We have noticed that this stock is capable of making wicked moves; In January it traded in the 4 dollar range, only to hit 30 dollars in July, for over 600% gained. We would love to see that happen again. 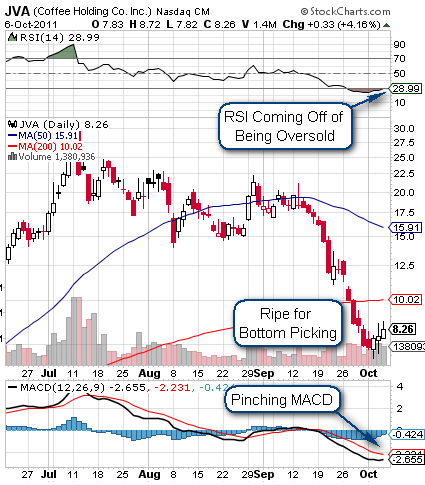 CIGX made a great move this week from a low of 2.00 to a high of 2.84, for a nice 42% gain. The MACD is currently pinching toward a cross, which will signal another bullish rally for CIGX.

Once again we have taken it upon ourselves to include an annotated chart for your viewing convenience which outlines some of the more attractive features of the chart. 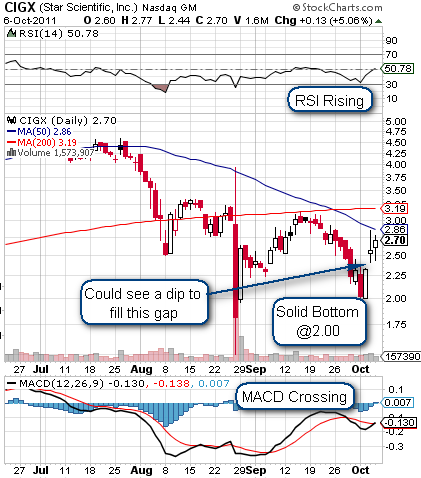 Take heed of the gap we pointed out, as gaps like that almost always get filled. After the current run has ended, we will be on the lookout for a retracement to the 2.34-2.41 range.

Early on this week, we re-added FBCD to our watchlist after a relatively long hiatus. The stock has performed exceptionally well for us in the past, and our confidence that another run is in the cards for the near future is increasing steadily.

We’ve seen an increase in volume over the past couple of weeks that leads us to the conclusion that savvy investors are loading up shares here at this relative bottom. It will be interesting to see where this stock will travel in the coming weeks.