To kick off this week, we sent out a reminder going over the extensive list of cannabis plays we published on April 4th in anticipation of Friday’s 04/20 Holiday celebrations and connected stock activity.

We expect a rising tide of interest and activity in the cannabis space for the remainder of this week and beyond, during what is one of the busiest times of year for marijuana-related businesses/stocks.

We are already impressed with the move made by CANN since our initial alert and through to this week. On the 4th, following our report, CANN established its base at 2.25 and hasn’t looked back. Yesterday the stock hit 5.75, marking a two week bull run of 156% As we said, we expect to see more moves like this from the myriad cannabis plays we track on a regular basis. (Non-Exhaustive List Here)

We also want to make note of VTVT this morning after noticing a number of attractive features on the chart. Pre-existing shareholders of VTVT are certainly not happy with the events of the past few months, but as opportunistic short-term traders, it has almost everything we look for a regular basis.

In addition to being monstrously oversold, the stock has seen a rise in average volume over the past week, after a massive gap-down which you can plainly view on the snapshot below. What makes the scenario so interesting, is that the company will need to reattain and hold the 1.00/share or risk involuntary delisting from the NASDAQ. With all these factors playing in, we’ll definitely want to put this one on extended watch in the event it attempts to fill even a portion of that gap. 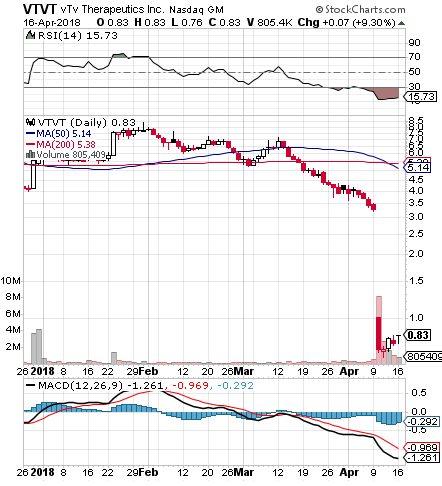