We formulated several targets in the KMX options chain yesterday morning in accordance with the solid earnings beat and premarket gap-up we were observing.   We specified some medium and longer-term contracts with the KMX C$57.50 and $60 Calls, and the 05/19 $60-$65 Calls. We were more than pleased with the activity that ensued.

We’re usually pretty good with our targeting, and these ideas were no exception. Every single one of the contracts we mentioned provided traders with the chance for some very nice single-session gains.

With that kind of activity on the very first day, we’re definitely going to want to keep these plays in mind going forward. There may yet be more opportunities still to come.

We tagged AKTX in yesterday morning’s extended watchlist and saw a very nice intraday performance. It traded in a daily range from a low of 13.69 to a high of 18.46, which represents a 35% spike on the day.

That move came on more than thirteen times the three-month average volume. On the whole, the activity in AKTX was extremely impressive, especially for a stock in its price range. The stock failed to maintain the majority of its daily advance, but we’ll remain interested provided it can register a higher base level of support to close out the week today.

We’re going to begin monitoring this super-subpenny stock after it just reappeared with its first filings in quite some time; two quarterlies and an annual report can be found at the company’s OTC Market filings page (>>View Filings). The filings bring the company current on its financial reporting.

We’ve seen a number of triple-zero stocks make exponential gains in recent weeks, and want to take a flyer on INOH on the outside chance that it could be the next rocket to leave the launchpad!

We are going to place TOPS on bottom-bounce watch this morning. Yesterday the stock held in there just above its 50DMA, and recent support levels. Earlier this summer, the stock shot up exponentially so the ability to make drastic moves to the upside is present.

We’re going to throw TOPS on the radar and will remain interested in tracking its progress provided it holds above its recent swing low of 3.67. As you can see on the included chart snapshot, the MACD appears to be converging toward an impending bullish cross, to that will be a signal to watch for as well. 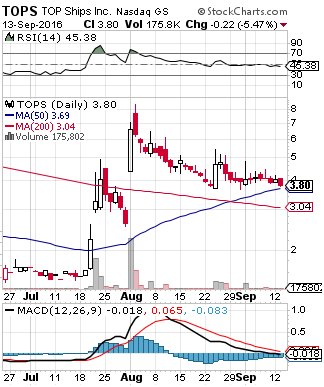 Here’s a stock that has had a whirlwind couple of sessions this week, breaking a long pattern of consolidation with two extremely bullish sessions.

We’re going to want to place NWBO on watch as a possible momentum play on the chance that it continues this multi-day run. As long as it can maintain support above yesterdays low which coincides with the 50DMA at .43, we’ll be watching for more solid intraday moves. 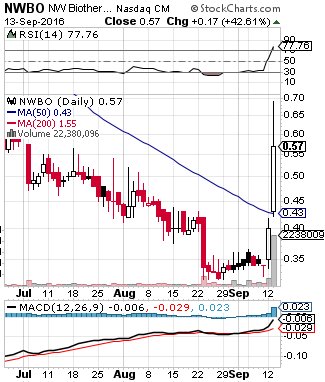 We began tracking AGTK at the beginning of August (08/02), and most recently reminded readers about the stock yesterday morning.

What followed was a nice intraday pop, and new overall high as it ran from .0026 to .0035, for a 35% swing. From the .0013 low we observed just after our initial alert on the play last month, yesterday’s high represented a total increase of 169%

It both cracked and held above its 200DMA into the close and the RSI just managed to breach into the power zone. We’ll be anxious to continue tracking its progress moving forward following these bullish signals. 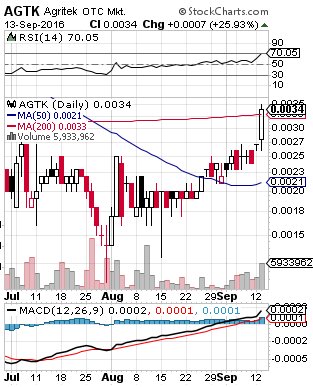 A huge standout from Thursday’s session was MAXD, which we tagged as a bottom-bouncer in our premarket report. The stock had been mostly trading sideways over the preceding couple of months, so our alert definitely came at the proper time.

From its daily low of .0033 right at the outset, the stock continually pushed the envelope for a vast majority of the session, eventually reaching the zenith at an impressive .007. That represented an intraday gain opportunity of up to 112% with heavy volume, on the order of more than three times the monthly average.

We’ll continue to track MAXD, looking for the stock continue building a higher base level of support in coming sessions.

We’ve been monitoring the cannabis space more closely over the past couple of weeks, since a big development from the labs at GW Pharma (GWPH) sent shockwaves through the investment community and began to drive heavier interest back to marijuana related stocks.

We’re still seeing those effects reverberating down to several of these ‘pot-plays’. One that stood out to us on Thursday morning was CNAB, and it enjoyed a respectable intraday performance subsequent to our premarket flag. We observed a low of .51 first thing in the morning, and the stock took off like a rocket. The high it shot up to was .75, marking a 47% rip.

The stock maintained a good portion of its daily advance into a close at .673, and of course volume was much higher than normal, so this is another that we’ll keep on our watchlist for the time being.

Another run of success we’ve had recently within the cannabis sector has been due to our call of CBDS. We first introduced this stock to our reports in early February, and would monitor the stock as it found support at .30 several sessions later. From there it began a gradual rise that became much more pronounced midway through this month.

The gains on the chart since then have been absolutely stellar, and CBDS hasn’t looked back, as it recorded a new high of 3.73 on Thursday. That brought the overall upswing we’ve witnessed in just a month’s time to a meteoric 1143%
_______

Another handful of marijuana stocks we’ve tracked over a long period of time are HEMP, TRTC, and GRNH, and those will continue to garner our attention in the immediate future, with interest in the sector bubbling up once again.