As we prepare to close out this holiday-shortened week, we’re going to start off by highlighting some more new highs in the SLQT 09/17 $7.50-10 Calls we’ve been tracking since August 31st. SLQT on the stock side of things alone, has risen by a considerable margin, running from 9.19 to 13.24 for a gain of 44%

We also want to update on a set of longer-term options in the EPAY chain that we designated for observation back on the morning of August 16th. EPAY has also made a solid move, and it facilitated some nice moves for our targeted range, the EPAY 09/17 $40-45 Calls.

Here are the new highs in the SLQT targets, as well as the overall range on the EPAY contracts since we alerted on them:

A couple of our fresh plays from yesterday morning’s report also made some great single-session gains for us on the day. Those targets and total possible profits were as follows:

* Please don’t attempt to trade weekly options on a Friday unless you are an experienced trader with access to disposable funds!

We’ve been tracking LOGG since bringing it to light in a report last week and even though it made some decent gains leading up to yesterday, that’s when the stock really kicked things into high gear.

LOGG exploded from an early low of .0995 and continuously pushed to new highs throughout the course of the day, reaching its high of .19 just prior to the close, for an excellent chance at intraday gains of up to 91% The stock also traded better than six times its monthly average volume, so we’ll want to closely monitor its activity early on today for its dip-and-rip potential.

PHOT had been bouncing around in a rough channel between the .012 and two-cent levels since we last tagged the stock for observation earlier this month. Right from the outset yesterday the stock’s bullish activity raised the alarms, with the announcement that PHOT would be relisting on the Bulletin Board as well as pursuing an uplisting to the OTCQX. (>>View PR)

The result of the wave of positive attention the PR garnered was a massive intraday run to the tune of 375% (.012-.057) that will keep us on alert as we close out the week for the possibility of a brief consolidation followed up by a potential bounceplay.

We’ve been tracking CTIC recently, and in addition to stringing together higher highs and higher lows in each of the past four sessions wherein it has roughly doubled in price, the stock appears to be gearing up to fill a rather sizable gap on its chart, which we’ve pointed out below. 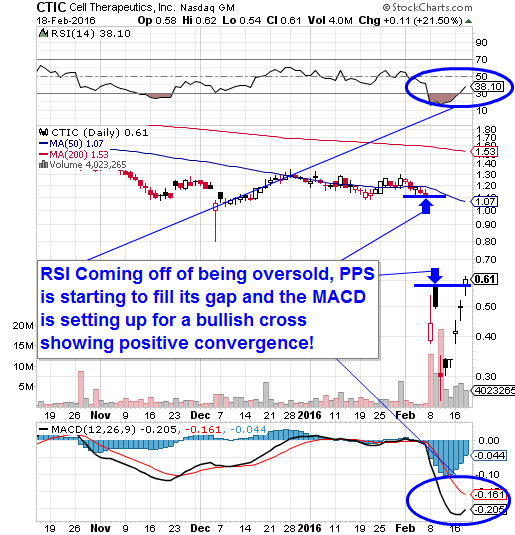 We like the future potential of the space PCSV has just entered into with its acquisition of a racing drone company. (PR Below) We’ll be placing PCSV on our longer-term radars as a result of this announcement.

While drone racing is a relatively new ‘sport’ that is still in its infancy, big plans for a national drone racing league have been backed financially by billionaire Steve Ross, who is most commonly known as the owner of the Miami Dolphins. (>>View Article)

We want to place a longer-term watch on newly-trading ELIO as well. Many of our readers will have heard of this exciting startup that is undergoing plans to market a three-wheeled (pictured below) that boasts more than 80mpg fuel efficiency and a retail price tag of less than $7,000. 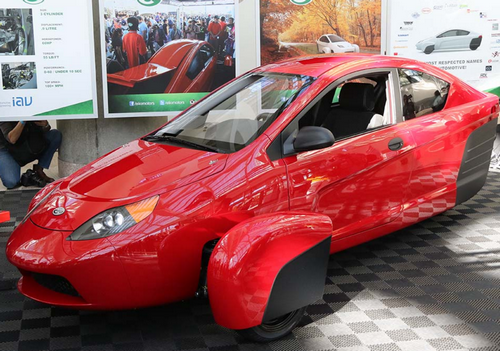 With Americans looking to economize any way they can these days, the industry disruption potential of a low-cost, high-efficiency personal transport stripped of unnecessary bells and whistles is intriguing to say the least. The backstory behind this one is irresistible (Visit ElioMotors.com to learn more), so we’ll be very interested to follow along in the early days of the stock’s trading to see how ELIO establishes its footing.

We’ll be looking for possible daytrading opportunities with Weekly VXX $26-27.50 Calls, and Weekly SPY $193-190 Puts based on the current atmosphere in the markets.

*Pertaining to both of the preceding ideas, remember to always consider the inherent elevated risk associated with trading weekly options contracts on a Friday!