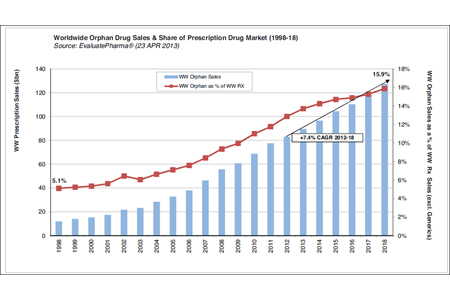 Since the Orphan Drug Act was passed in 1983, the global market for development of drugs used to treat rare diseases has skyrocketed.  At that time, drug therapies for such diseases were rarely developed.  That has changed in today's multi-billion dollar market.

Orphan diseases are often overlooked by the pharmaceutical industry, since there is very little financial incentive to treat illnesses which affect fewer than 200,000 people nationwide.  This includes ailments such as Cystic Fibrosis, Lou Gehrig’s disease, Huntington’s disease, and Tourette’s Syndrome.

Alexion Pharmaceuticals, a $24 Billion dollar Biopharma, has become the Orphan Drug leader with over $1.1 Billion in sales last year.  When the company finds a drug with leading-edge science behind it, they go after it.

Savvy investors know just where to look to find the next big drug.  Court filings have revealed that Alexion has just received the winning bid on assets from this $7M microcap company, and Wall Street hasn’t caught on yet….until now!