Today, we are pleased to initiate coverage on a company that is embedded in one of the trendiest market spaces in the modern age, video entertainment. MVES is positioned to take advantage of the mega-wave of consumer interest in TV and movies on-the-go, and could one day even become a buyout candidate.

Even before the coronavirus health crisis began to drive consumers’ unprecedented reliance upon the home entertainment sector, and long after the virus is subdued, one of the biggest growing sectors was, and will continue to be, on-demand digital content.

Hollywood is moving with the trends as well, as it is becoming more and more commonplace to see production houses release their content directly to video-on-demand (VOD) services, and those services themselves have become a hot commodity. Entertainment super giants like Fox and Viacom have recently paid handsome sums to acquire streaming content providers like Tubi and Pluto TV, respectively.

Our focus today, MVES represents a ground-floor opportunity for individuals looking for the next startup service to crack into the big time. But it isn’t  just another run-of-the-mill streaming service. MVES produces its own content, with an added interactive twist that sets it apart from others. ‘YOU TOO CAN BE A STAR’

The company’s unique approach to production is to film motion pictures in ten chapters called “MovieSodes”, and then edit them together to create the completed film. The chapters will be released via The Movie Studio’s mobile app (already available on iOS and Android app stores).  These MovieSodes integrate the MVES vertical of “Watch our Movies, Be in our Movies”, where for $2.99 a month, users can touch a button in the app, a green screen appears which shows the scene of the movie,  and they film themselves acting the part and saying the lines and then upload their Video Audition and submit for consideration to actually be the Star of its next movie.. In a culture where so many people dream of being a star and making it big in Hollywood, we think this distinctive niche feature could be a huge selling point for MVES‘ services. Just like Facebook started in a college dorm, and then spread to the rest  of the world, from friend to friend, The Movie Studio app has traction particularly starting with the youngsters of the world.

MVES, in addition to currently working on a number of content projects, also remains continuously focused on other merger and/or acquisition opportunities that increase its potency as a potential future buyout candidate. We will be very interested to follow its story as the company strengthens its portfolio and readies itself to make its mark on the entertainment industry!

Things have gotten very exciting for MVES in recent weeks as the company has signed a new advertising agreement, as well as officially filing for trademark to secure its unique branding:

MVES was as high as .04 earlier this year, so we know it is capable of reaching those heights again. The stock is presently building support for a rebound, having recently registered higher lows on increasing volume. Upward price movement often follows accumulation, so we’re on our guard..

MVES has a very tight share structure, with just 19.45M in the float. That means the stock can go on a significant run with a relatively small amount of buying pressure. 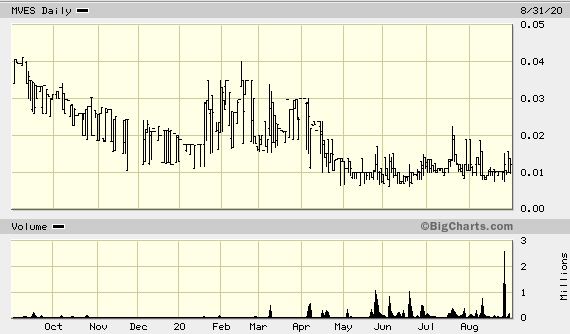 Our main point of focus in yesterday’s premarket report was a bearish stance on ANF to correspond the company’s earnings miss. We wanted to use the impending selloff to our advantage, and for that we selected the ANF Weekly $22-19.50 Puts.

The activity unfolded just as we expected it would, and as a result our observed contracts provided us with nice intraday gain opportunities.

While the contracts don’t expire until Friday, this is likely to be a one-day idea that we’ll now be moving on from, as the chances of seeing ANF take another dramatic backslide seem rather slim at this point.

We want to circle back today to recap a couple of plays we added to our watchlist on Friday morning. Both have left their lows behind, with each of them going on to register new highs yesterday.

Force Protection Video Equipment, Inc. FPVD – This play found its bottom on Monday at .016 before leading into yesterday’s high of .027. That goes down in the books as a three-day, 68% shift to the upside.

VEEV posted a 34% year-over-year increase on revenue in this morning’s earnings report, and like usual, we want to signal a range of options contracts to monitor as a result. Our targets are going to be the VEEV 09/16 $39-42 Calls.