HNR set off our scanner this morning as this energy stock appears to be gapping up heavily in pre-market trading. Harvest announced this morning that it had entered into negotiations to sell the company’s Venezuelan assets, and spin off its remaining assets into a new company, a move that the CEO believes the proposed sale “affords the Company and its shareholders the ability to reap the benefits of our exceptional portfolio in the near term.” We’ll certainly be watching, as HNR is currently up 35% (a/o 8:30am).

In addition to this morning’s press release (below), the company will be holding a conference call tomorrow for anyone interested in learning more about the proposed transaction and its ramifications. To access the conference call, dial 800-344-6698 or 785-830-7979, five to ten minutes prior to the start time. At that time you will be asked to provide the conference number, which is 3073565. A recording of the conference call will also be available for replay at 719-457-0820, passcode 3073565 through September 17, 2013.

HOUSTON, Sept. 11, 2013 /PRNewswire via COMTEX/ — Harvest Natural Resources, Inc. (NYSE: HNR) today announced it has entered into exclusive negotiations with Pluspetrol Venezuela S.A., an entity belonging to one of the leading exploration and production companies in Latin America, to sell the outstanding shares of Harvest. >>> FULL REPORT

We first called CETV on May 10th after it popped up on our Form-4 scan. At the time it was trading at 2.67, and in the roughly four months since that time, it has yet to dip below that price.

We are placing it back on watch for further gains as it is approaching its recent high of 4.85 (reached at the end of August), which represented a gain of 82% from our bottom. We’re interested to see if the stock can now break past that previous swing high for added gains. Conditions on the chart suggest this as a possibility, as you can see, the RSI is rumbling toward the powerzone, we have a potential Golden Cross of the 50 & 200DMA currently setting up. 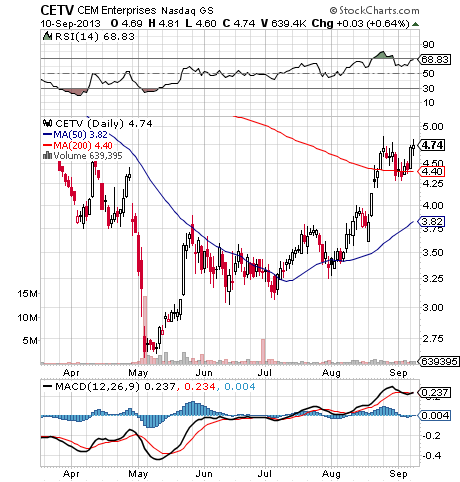