This morning we are going to be focusing on a company with a very interesting operation in the ever-trendy craft brewing/hospitality industry, which happens to be located in an ideal spot for ‘beer tourism’. The 1812 Brewing Company (a.k.a. Sackets Harbor Brewing Co.) trades on the OTC Markets under the synergistic symbol, KEGS. and has recently made strides to ramp up its operations.

Sackets Harbor is a picturesque lakeside village just outside of Watertown in Upstate New York. The harbor itself is located at the far east end of Lake Ontario just a short distance from the mouth of the St. Lawrence Seaway. The upscale restaurant/brew pub that is part of KEGS‘ business occupies one of the most attractive waterfront lots in the area, making Sackets Harbor Brewing Company a real destination for beer enthusiasts, and centerpiece of the community.

The company has recently established its own 13,000 square foot brewing/bottling facility and corporate office in nearby Watertown that will allow it to become more self-sufficient in its production process and provide an avenue for real growth. The new facility also has a high enough capacity for the company to begin offering contract brewing to local artisans, which would open up an additional revenue stream.

The US craft beer industry is worth over $20 Billion annually, and is growing at a rapid rate of roughly 15% per year. Even during the COVID-19 pandemic, the sector has remained relatively strong, holding much more of its value than harder-hit industries. The number of people employed in craft beer production in the U.S. increased by 16.2 percent on average between 2016-2021, according to market researcher IBIS World.

We highly recommend checking out the KEGS Facebook page for videos of the new bottling facility in action for the first time last week, and a lot of other current information direct from the company.

We believe that KEGS has a lot of substance compared to most stocks in its price range, many of which are still in the very early stages of establishing their businesses. In this case, we’re looking at one of the oldest continuously running microbrewery/restaurants in the State of New York, preparing to launch into the next phase of its life.

In the weeks and months ahead, the company has expressed its plans to add 5 new beers to its stable which already includes the popular War of 1812 Amber Ale and Thousand Islands IPA. Some of the names revealed by KEGS for the new recipes include: Malicious Intent XXIPA, 3rd Rail Porter, Railroad Red, Route 11 Lager, and Helles Bells Lager.

We’re eager to watch the company expand its operations and build the 1812 brand, and will be certain to pass any new developments along to our readers as they occur. If you are not yet subscribed to our free daily reports, you can click here and get yourself signed up.
_____

We also feel that there is potential with where KEGS currently is on the chart, as we’ve pointed out below on the annotated snapshot below. It has recently established support in the .003’s, and indicators would seem to suggest that the stock is presently oversold. A return to levels of even just a few weeks ago would equate to a considerable increase. Definitely one to watch in the upcoming days and weeks! 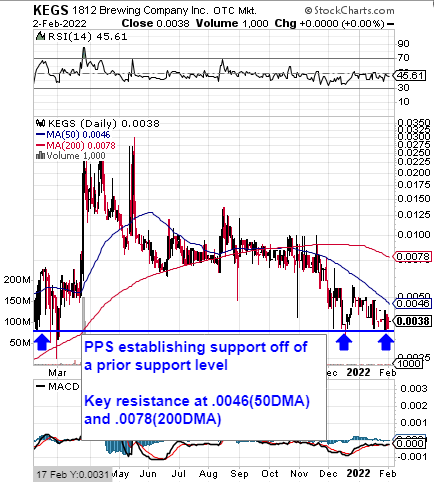