We were spot on in terms of the options ideas we offered up in yesterday’s premarket report.
After taking a look at the premarket activity being driven by some untraded-upon press, we targeted the MDCO Weekly $38-41 Calls. We specified that we’d be on the lookout for a dip-and-rip scenario to give rise to chances in that range, and it turned out quite well.

Here’s a look at the possibilities for big gains that traders were afforded with those contracts:

A couple of the stocks we’ve had on bottom-watch which we mentioned in yesterday’s report had modest yet notable sessions to kick off the week, and we’ll continue to monitor for signs of continued recovery in both instances.

Bon-Ton Stores, Inc. BONT – We’ve been on BONT’s trail for a couple of weeks, and yesterday the stock made a slight jump from 3.60-4.07 for an intraday move of 13% and held the majority of those gains into the close.

We’re seeing some bullish patterns on the UWTI chart that we felt were worth pointing out. As you can plainly see on the annotated snapshot below, this particular note has traded record volume en route to logging four consecutive sessions of higher highs and higherl ows off of its recently established 52-week low.

We’ll be on the lookout for the possibility of further advances provided that Crude Oil futures can see a sustained uptrend over recent lows. 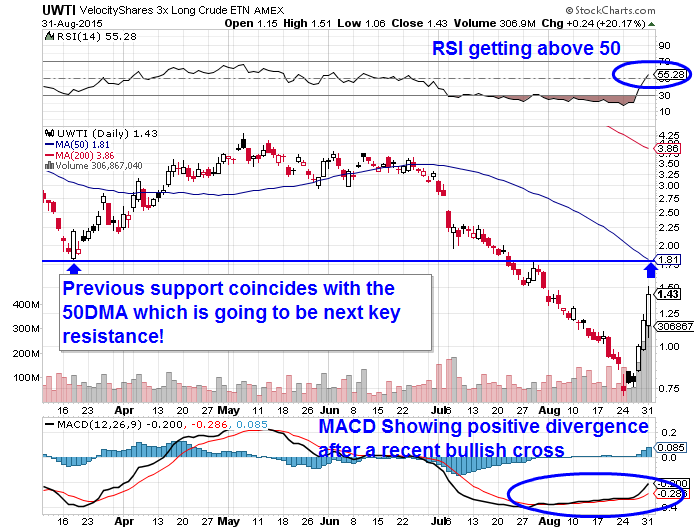