KGRI has one heck of a chart setting up as we begin this new trading week. There are several reasons to get excited about the state of this favorite. We have an RSI approaching Power Zone status, an enormous surge in volume, and a MACD indicator just on the cusp of crossing up.The stock hit a recent low at .0004,  the level of our original call, and is beginning its ascent once again. The last surge from this level yielded .0016 and 300% in gains! Could we see a possible test of recent highs?

We are looking for resistance to broken at .0011. 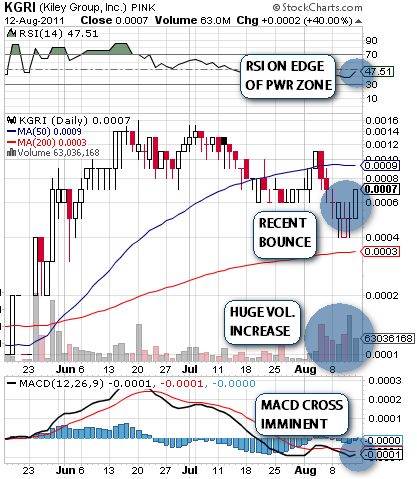 We are absolutely excited about the Friday’s PR coming from EMXC. As if the stock hadn’t already been a golden goose, another interesting development notches up the anticipation for continued success.On the stock side of things, EMXC looks like it has built support around .0018, and resistance at .0024. We will be watching for the RSI to bounce off of the 50 mark as it has on multiple occasions, bringing with it another uptrend.

For now, we are eager to observe EMXC moving forward, as our interest in this play has been been fervently reinvigorated.

Roxanna Weber, Chairman of eMax Worldwide, Inc., stated, “Everyone at eMax Media is very excited to work beside the incredible production team at Atlantic Crossing Productions. We feel very privileged to be granted this opportunity to help the production success of the television series, ‘The Real Housewives of India’ and play a part in the expansion of this great television brand into the Worldwide television marketplace. In addition, eMax Media has agreed to offer to license songs from their extensive music catalog for any soundtracks that might be required in the television series productions”.

Atlantic Crossing Productions LLC., (ACP) has partnered with NBC Universal to produce Indian versions of their reality shows formats. These shows have had excellent performance in the United States with very high ratings. The Real Housewives is one of the shows which will be produced by Atlantic Crossing along with its production partners in India.

Last, but not least, EXTO remains on our watchlist out of its sheer workhorse nature. We first jumped on EXTO at .0025 because of its bouncy appeal, and it has proven itself to be a good call in that regard.

Moving forward, we expect that behavior to continue, and we are anxiously awaiting more developments in the recently proposed merger with Bayport, which will only exacerbate any momentum already in the stock.

EXTO hit a high of .0072 on Thursday, bumping into its resistance point before closing at .0069. That is the interesting thing about the chart that we wanted to point out this morning. As you can see by the annotation, each time the stock has run into resistance over the past couple of months the resistance level has become the new support level. That is a phenomena we would like to see continued here.If we are correct, support should be building in the high .006’s- low .007’s as the stock gears up for its next push.  In addition the RSI is just about to peek over into the Powerzone. Don’t let EXTO fall off your radar.

Another stock that we have witnessed breaking resistance, building new support levels would be EMXC.  We are looking at the building of an incredibly solid chart over the past few months, as this play continues to touch higher highs, pushing the envelope all the way. Our original call came at .0005, and since then we have seen steady uptrending.We like the way this play steadily builds headway, and as PPS appreciation continues to be sustained, this stock lands firmly within the realm of All-Star plays for 2011.

GOIG opened up at .0014 on Wednesday, trading up to .002, or, 42.8% on the day before receding to .0011 just prior to the close. Another painfully shaky day in the US markets, though we are cautiously optimistic that such downtrending cannot be sustained indefinitely.

Not to mention the fact that down here on the penny markets, economic pressure tends to affect stock somewhat less than their upper-exchange counterparts. So there is still opportunity out there, still money to be made, as GOIG proved to us, prior to 3pm yesterday.

GOIG has a history of big runs, and the large volume that is still in this stock leads us to the notion that there are new buyers taking positions, and like us, waiting for a surge to ride straight to continued profits.

This stock has been our top pick this year, with one of the best looking charts we’ve ever seen:

EMXC held its support at .0019, as we mentioned we would like to see earlier on this week. The resistance point will be our previous high of .0024, and will wait to see a break past that level.

We like stocks trading in a tight channel, as this is usually an indication of the next impending leg of upward trading.