We tagged SPDC for observation in our premarket report on Friday, and what has followed is two consecutive days of upward momentum.

We’ll continue to do so for the time being- the recovery off of recently recorded annual lows has been rapid, as can be seen on the following chart snapshot. A return to PPS-levels of just a few weeks ago would mean significant gains from the current price, so we’ll have our eyes peeled for the possibility of a continued uptrend.

After poring over the earnings calendar from post-market yesterday and this morning, we came across a pair of interesting plays for which we’ll formulate a couple of correlated options ideas.

Despite an earnings miss this morning, FMER is flying in premarket trading on concurrent news of a $3.4B buyout/merger with Huntington Bancshares in a deal that will effectively create the state of Ohio’s largest regional bank. We’re going to tag the FMER 02/19 $17.50 and $20 Calls for potential dip-and-rip scenarios.

Regarding RMBS, we’re seeing a classic earnings-beat gap up to the tune of 7% in early trading today. Better than expected figures were released post-market yesterday, so we’ll be tracking a set of contracts here as well. Specifically, the RMBS 02/19 $12 Calls.

As a special point of focus today, we’re going to be talking about PSID, and the reasons for our attraction to this stock are numerous. From fundamentals to technicals, PSID has the look of a high potential play, so this morning we’ll outline what we feel are some of the highlights to provide our readers with a good jumping-off point from which to start their own due diligence.

One of the first things that strikes us with regard to PSID is the frequency and substance of recent press releases. The company appears to be taking a proactive and multifaceted approach to its growth including two complementary acquisitions, as well as the announcement of other updates regarding its existing technologies (pictured below). 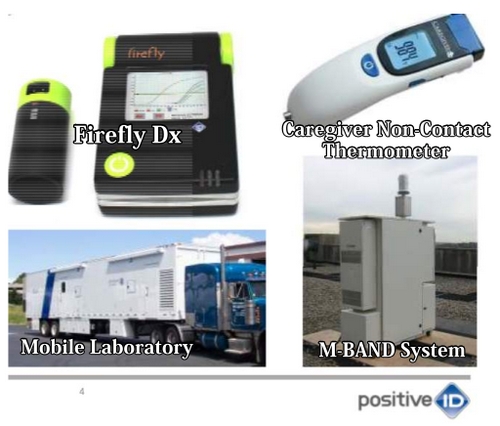 Prior to the end of 2015, PSID‘s two primary products under development were the Firefly Dx handheld point-of-need diagnostic device, and the M-BAND bio-threat detector.

The M-BAND is serious business, detecting potentially harmful biological agents in high-traffic public locales such as airports and subway terminals. It was developed with funds attained via the Department of Homeland Securities next-gen BioWatch program, and PSID has an exclusive licensing and manufacturing agreement with the Boeing Company.

The company’s working prototype Firefly Dx has proven successful at detecting influenza, MRSA, E.coli, and several other harmful pathogens without the help of a brick-and-mortar lab, and according to the company’s projections a fully field-testable unit will be functional later this year. When perfected, it will provide a highly synergistic complement to PSID’s other recent acquisitions.

The first of which was in the beginning of December, when the company acquired Thermomedics, Inc. and its flagship product, the FDA-cleared Caregiver® non-contact infrared thermometer. (>>View PR)

Just prior to the new year PSID announced another exciting acquisition that has the ability to take its business to the next level, as it ties the company’s other technologies together. E-N-G Mobile Systems has been in business for 25 years, and has averaged $4M in revenue annually with its mobile laboratories. With the added facility of ambulatory lab systems, PositiveID’s ability and effectiveness in addressing the ever-growing necessity for rapid biological threat detection in the field should be stronger than ever. (>>View PR)
__________

In addition to the expansion of its portfolio, PSID has also been making fundamental strides, as recent filings clearly indicate. The 2015 fiscal year brought increased revenues and cash flow, and the recent acquisitions should serve to bolster those figures even further in 2016. (>>View Filings)

We also want to look at the PSID chart, which in and of itself would be reason enough for us to track this stock. Over the past three consecutive sessions PSID has recorded higher highs and higher lows, building support off of its recently established 52-week low. This is exactly the type of ripening bounce-play setup that we search for on a daily basis.

As is evident on the snapshot below, the stock also has a documented history of making rapid moves to the upside. We could be catching this play at a prime moment for a continued recovery, so it will be among our top interests in sessions to come. 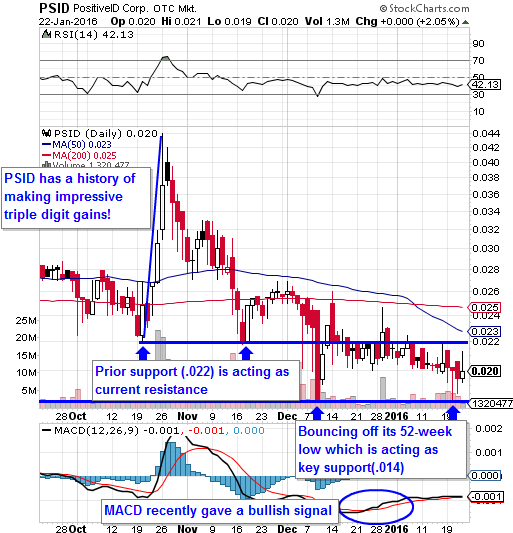 SPDR S&P 500 ETF (SPY) – The SPY is one of our favorite funds to take advantage of when market conditions permit, and based on the general atmosphere this morning after crude oil’s impressive rally yesterday, we definitely want to signal a range of contracts for tracking.

We’re specifically looking for the heaviest activity to fall within the SPY Weekly $187-191 Calls*, with the SPY trading in the $189-range here in the premarket. If we do see a dip to start the day, we’ll need the subsequent bounce to occur above that $187-level for this idea to remain valid.

*Don’t forget that trading weekly options contracts on a Friday is an inherently risky proposition, as they are on the verge of expiration. It can, however, be a chance for experienced traders to take advantage as premiums dissipate and volatility increases.

DECN was included in our pool of interests from yesterday’s premarket report, and the stock went on to put up a respectable performance.

From a low of .15, DECN ran as high as .24 for potential intraday gains of up to 60% and the move happened with the aid of roughly nine times the monthly average volume.

There have been a couple of events that have TUBE flirting with new relative lows this week. A nominal amount of insider selling seems to have coincided with some  third-party content in its news feed casting the stock in a disparaging light.

Events like these awaken the bargain hunters within us. The stock is approaching previous levels of support as we’ve pointed out on the chart below, so we’ll be monitoring for a possible reversal to occur in that channel in forthcoming sessions. 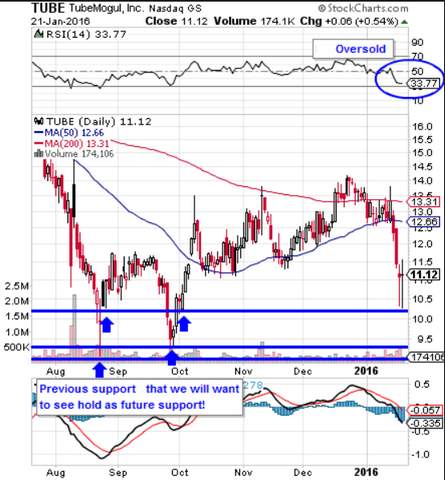 We’ve noticed SYRG trending up off of its own recent bottom over the past couple of sessions, and we like the overall look of the chart and the strength building therein. We’re looking for this stock to record higher highs and higher lows and continue to build momentum.